Washington Redskins players all received iPads this season with the team’s playbook loaded on them. The playbook allows players to send team-wide messages anonymously. It was designed to discuss plays, but Chris Cooley, TE for the Redskins reveals that some players are having a little fun using the feature for “trash talking”. 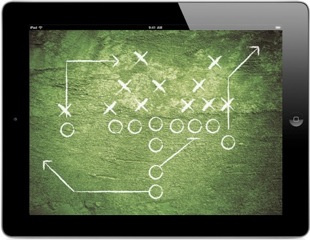 “Niles Paul told me,” Cooley said when I asked him about it Friday. “I don’t know who figured it out or who started it. Like I said, they’re anonymous. As of today, there are maybe fifty postings. My opinion is that it will take off.”

Paul found out about it the hard way.

“I think Niles pointed it out because Niles was on there [as a target] a couple of times,” continued Cooley. “[Brandon] Banks is on there. I’m sure I’ll be on there. I’m an easy target.”

“I just found out about this today,” said Ryan Kerrigan. “Literally just before practice, so it looks like I have some typing to do tonight.”

Not everyone was knowledgeable about the “feature”.

“I didn’t even know,” laughed Brian Orakpo. “All I’ve seen is the playbook and stuff. It’s about to get serious, now that the word’s out. That’s crazy.”

While the “trash talk” is all in fun, at least one player is ready to take it to a whole new level.

“Man, they don’t want to play with me,” said linebacker Chris Wilson. “I’ll [trash talk] someone for no reason, just because I can. I’ll make some alliances, take people out. No joke.”