According to a new study,  Objective-C, the programming language used to build applications for the Mac, iPhone, and iPad, is now the 3rd most popular coding language among programmers. 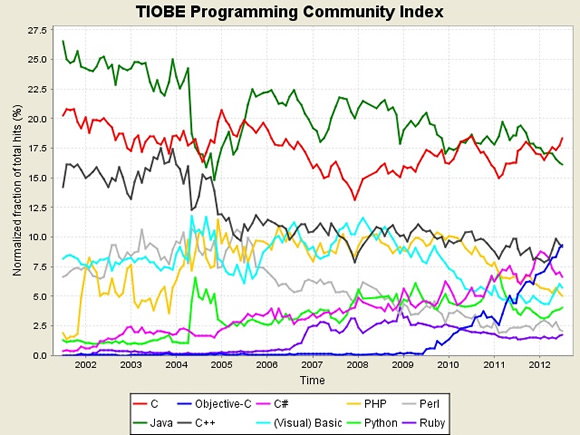 Moving into the third spot in the oft-cited TIOBE index, Objective-C has surpassed C++, another derivative of the venerable C programming language. C itself is still at the top of the list, followed by Java.

One year ago, Objective-C was ranked 46th on the list. It’s sudden rise is all about the popularity of Apples iOS devices. “This is less about Objective-C and more about the success of the Apple ecosystem,” says Nolan Wright, the technology chief at Appcelerator, a company offering a development tool that spans various languages and platforms. “Objective-C is enjoying that benefit. If it had been another language [on the Apple platform], it would have enjoyed that too.”

Objective-C was used to develop applications for the NeXTSTEP operating system, which was developed by Steve Jobs and his NeXT Inc. team in the mid-1980s. The NeXTSTEP OS later became the basis for Apple’s Mac OS X operating system as well as iOS.

According to the TIOBE Index — which surveys engineers and crawls the web for code — Objective-C accounts for 9.3 percent of the world’s software, while C++ stands at 9.1 percent.

While the App Store is the main reason for the ascent of Objective-C, some cite the ease of learning the language as a selling point. “Almost anybody can just pick up a book and learn [Objective C] basics,” says Eric Shapiro, technology chief of app developer ArcTouch. “That doesn’t make you an expert, but that does mean that so many more [developers] are familiar.”

Objective-C is probably not moving into second place anytime soon. The #2 language, Java is a mainstay on servers, running back-end services for online servers feeding information to PCs, smartphones, and tablets. It’s also the language used to build apps for Google’s Android OS. Which is still the most widely used mobile operating system in the U.S.