It seems movie to game franchises always seem to release like clockwork, no matter what movie it is, especially if it’s estimated to be a blockbuster, which most comic book movies are. The newest of these action-adventure crossovers is The Dark Knight Rises ($6.99, App Store Link). 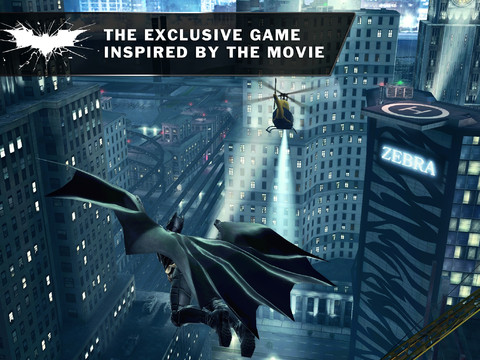 Based off the movie, the game can be a blockbuster itself for the iOS platform. It takes a lot of elements from the highly successful Arkham series. Gameloft is known for big name games and franchises for iOS. The Dark Knight Rises is no exception. It’s one of the best action-adventure titles from Gameloft and even more, the best Batman title on iOS.

The game has six chapters and includes enemies from the movie, Bane and Selina Kyle. The game does take a bit of the story from the movie, so if you have yet to see the movie, there are spoilers in the game. Even though you can freely use Batman’s grapnel to go from rooftop to rooftop, the game is linier in the sense that you fight a few foes, then either it fades into a cut scene or you go to the next set of enemies.

The action and combat is excellent all on its own. You can use a few tools, such as the Batarang or the grapnel to take down enemies. Of course you can also use the combat style such as taking down enemies, from above, being stealthy and taking them out from behind, or what works best, is to fight head on ie: evading, countering, and striking. 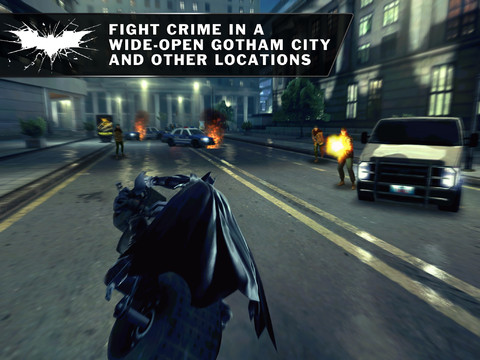 Besides plenty of combat, you can drive in the bat-pod and solve puzzles throughout the levels, so the game isn’t so repetitive and to keeps the story flowing. Speaking of the puzzles, if you’re familiar to other Gameloft games such as N.O.VA., then the puzzles should be easier to solve.

One thing that’s pretty cool is about The Dark Night Rises is that you can glide from rooftops instead of just using the grapnel gun. It’s not too accurate, because when gliding Batman through the air, it lags a little, which can get frustrating, but the graphics are well done, so it’s still nice to gaze upon Gotham City.

Furthermore, besides gliding through the air, the controls can also be sort of stiff. You can the onscreen joystick to control Batman, swiping across the screen to control the camera, and a few action buttons on the right of the screen during combat. Sometimes an action button will come up throughout the game to untie a bystander who’s being held captive or interacting with things like doors or codes to solve the puzzles. Controlling the Bat-pod is surprisingly smooth. With most action-adventure games, controlling vehicles can be difficult at times because the controls aren’t designed fot driving as much as it is for combat and action. 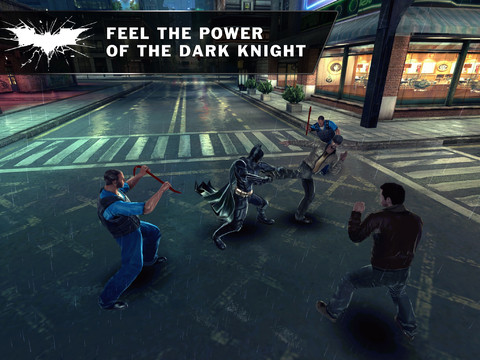 The graphics of The Dark Knight Rises look great besides a few minor issues. The camera can be an issue at times, especially during combat and when gliding Batman through the air. Also, when trying to interact with the environment, it gets frustrating at times when you’re trying to get at an angle just to tap the button. You have to be directly in front of an object for it to hover above, which is the result of the camera.

There’s a lot that the developers did well relating to the graphics. The character models and Gotham City itself look really well done. It does look deserted at times, however. It would have been nice to see more vehicles or bystanders walking down the street. The game looks well done on previous gen iPads and iPhones, but it looks slightly better on the retina display. 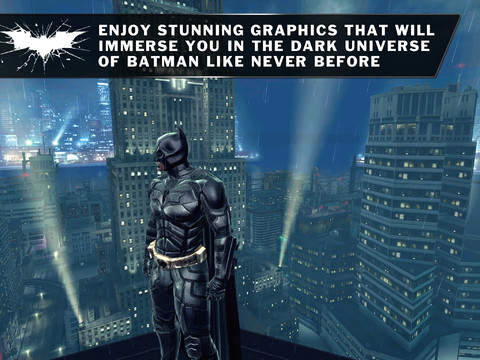 The Dark Knight Rises is a great tie-in to the movie and perhaps one of the best Batman games for iOS to date. Besides the action/adventure aspect of the game. There area bit of RPG elements as far as improving your XP as you beat foes and complete missions throughout the game. You can use this XP to upgrade things like weapons and items through the in-game store or if you so choose, you can skip that and just buy it through in-app-purchases.

Besides the few miscues such as the camera and the somewhat questionable controls, The Dark Knight Rises is still a great action/adventure. It may not live up to the hype of the movie or Rocksteady’s Arkham series, but if Gameloft has rights to future Batman games not related to the movie franchise and keeps building up on what they have in The Dark Knight Rises, there will be a great fan base to support it. 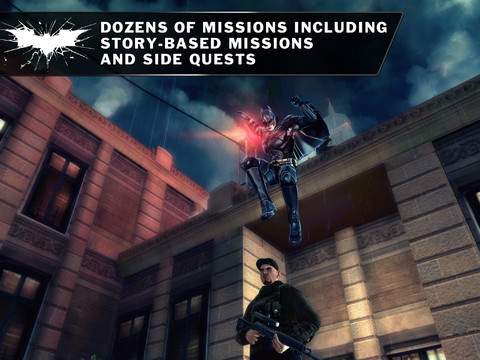