Apple once again recognized December 1st as World AIDS Day at its retail stores and on its website. Apple has provided similar recognition in the past. 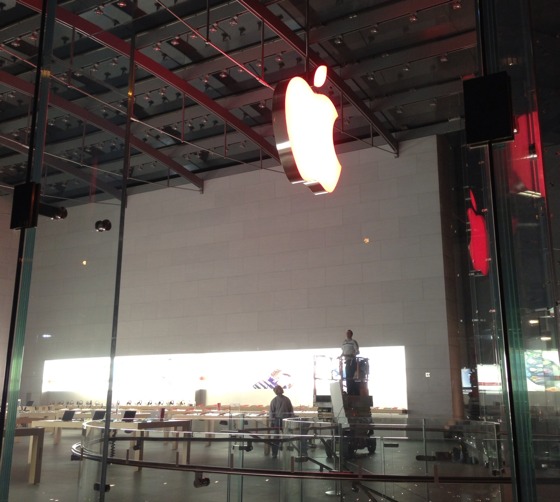 Some stores, including several locations in New York City, have also colored their Apple logos red for the occasion. A MacRumors reader sent in this image from the Upper West Side outlet and noted that retail store staffers appear to have replaced the cases on all the products in the store with PRODUCT (RED) versions.

Apple has sold a number of PRODUCT (RED) items, with a percentage of the profits going to the Global Fund to fight AIDS in Africa. (RED) versions of Apple products include: the iPod shuffle, iPod nano, iPod touch, the iPad and iPad mini Smart Covers, the iPad Smart Case, and the iPhone 4S Bumper.

From the Apple PRODUCT (RED) webpage:

The numbers don’t lie: Every day more than 900 babies are born with HIV. By 2015 that number can be nearly zero. (RED) works with companies like Apple to fight for an AIDS-free generation by 2015 by creating (PRODUCT) RED merchandise. A percentage of gross profits from the sale of those products goes to the Global Fund to help fund AIDS programs in Africa. Since its introduction, (PRODUCT) RED has generated more than $190 million — more than $50 million from Apple alone — for the Global Fund. Now you can make an impact, too, by purchasing a (PRODUCT) RED iPod shuffle, iPod nano, iPod touch, iPad Smart Cover, iPad Smart Case, or iPhone Bumper.

Apple also had a prominent link on the bottom of its homepage to (RED)’s World AIDS Day page.

Even though the World AIDS Day has passed, it’s still not to late to support the fight. Visit the Apple PRODUCT (RED) page and purchase the products found there. Apple and Starbucks are also joining forces during the holiday season to sell an iTunes and Starbucks gift card combo and are donating 5% of the purchase price to PRODUCT (RED).