As anyone who frequently participates in video chats, conference calls, maintains a YouTube Channel, or works with basic video broadcasting could tell you, the quality of the camera you use when capturing video is crucial. There are a wide variety of webcams available, and choosing the right one is important. If you’re in the market for a webcam, or may be looking for which one to buy next, Logitech has a unique new offering that we think you’re gonna love: The Broadcaster ($200, Amazon).

While there are a broad assortment of webcams on the market to choose from, the Logitech Broadcaster sets itself apart from the competition in several interesting ways. First, it ditches the traditional USB cable in favor of WiFi streaming, which keeps your USB ports free – but it also allows for higher quality video transmissions that aren’t constrained to the limitations of USB output. Second, it allows you to stream live video directly to Ustream without the need for a computer! It’s a cord-cutter’s dream come true!

The Broadcaster immediately stands out from the moment you remove it from the box. Instead of taking the form of a sphere that latches onto a computer display, the Broadcaster is long and rectangular, and harbors a trio of buttons which control its various functions.

On the bottom of the Broadcaster, you’ll find a small round bump, which is used for attaching the device to its included stand . The front of the device features a powerful lamp, right next to the camera sensor, and on top of the device you’ll see a large round button with a cloud icon, which sits directly below a pair of light used to indicate WiFi signal and battery level.

The magnetic mount combines with the rounded bottom of the Broadcaster, allowing you to set the device to any angle you’d like, and then holds it in place. To make things even better, the stand’s magnetic lid also has a tripod mount on the bottom, granting you the flexibility to hook up to a tripod for situations where the stand itself isn’t ideal. The use of magnetism to secure the Broadcaster – and even allow you to adjust and secure its angle, is absolutely brilliant. It’s unlike anything I’ve seen before on a webcam, and it’s remarkable.

The Broadcaster itself has a very secure, durable feel in hand, and looks just as well-build as it feels. The entire impression given from the packaging, the unique case/stand combination, the magnetic mounting system, and the excellent build quality of the webcam itself is that Logitech put every effort into making the Broadcaster one of most innovative and highest quality webcams available. 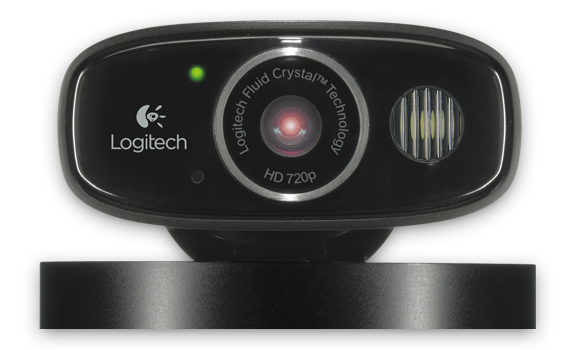 The physical design of the Broadcaster is certainly unique and innovative – but what’s most important is how well the Broadcaster performs. Fortunately, to my delight, the answer is that it works extremely well – and Logitech has managed to pack a heavy dose of innovation into the functionality of the Broadcaster as well!

In order to set up and use the broadcaster, you’ll need to download a companion app for either Mac or iPad. The app guides you through the process of pairing the Broadcaster to your device and linking it to a Ustram account (if you have one), as well as setting it up to connect to your WiFi network. The entire process is slick, streamlined, and painless – you enter your WiFi password into the app, which then displays a QR code. Then, simply aim the Broadcaster at the code and holding down the top button until it beeps. That’s it! You’re all set up, easy as pie!

Once the Broadcaster is set up, you no longer have to ever connect the device to your Mac or iPad ever again if you don’t want to – it works seamlessly with Ustream, and can begin streaming video all by itself, as long as you’re within the range of the WiFi network you set it up on. That in itself is magical, and unheard of in webcams until now. Using services other than Ustream (such as YouTube, Skype, Facetime, etc) does require you to connect with a Mac or an iPad, and in my experience, it works with pretty much any app or web service under the sun that is designed to work with a webcam. I never had a single issue. It just works. Simple, painless, and functional.

For the $200 price tag that comes along with the Broadcaster, I had high expectation in terms of audio and video quality. I was not disappointed. The camera is capable of streaming on either 360p, 480p, or 720p resolution, and I found that the quality on all settings was immaculate. I don’t have a single complaint in this category. It’s worth nothing, however, that as with all cameras, lighting is crucial for capturing great-looking video – and depending on the small lamp on the front of the Broadcaster might not get you the effect you were hoping for.

The audio quality was also excellent. I tested audio through both the built-in microphone and an external mic, and found that while the build-in mono mic does capture audio very well, and without any significant distortion or background noise, the audio was understandably better when using a dedicated external stereo mic.

The Broadcaster is advertised as having a two hours battery life – and in my testing, I found that to be accurate. In fact, I typically found that I could get about two and a half hours of usage without much difficulty. For a camera as small as the Broadcaster, the battery life is very impressive.

When using the iOS app after having set up the Mac app, I discovered that the camera occasionally had difficulties communicating with my iPad unless I set my Mac to sleep or power it off. This didn’t happen every time, however – but the interference did prove to be inconvenient after a while.

While the Broadcaster can stream video to Upstream completely on its own, the companion apps for Mac ad iOS do add some useful features. For instance, you can easily snap pictures while streaming video, capture video from multiple sources, and switch between those sources (such as from your Mac’s iSight camera and the Broadcaster simultaneously), and record video directly to your Mac or iOS device. The apps also make it a snap to set up the Broadcaster, as previously mentioned. You can also adjust audio and video settings, such as tweaking exposure levels, setting a custom audio source, and so forth.

For all intents and purposes, the Broadcaster Mac and iPad apps are useful companions for more advanced recording, or for adjusting settings while streaming – but the real beauty of the Broadcaster is that the apps aren’t necessary. They’re there when you want them, and gone when you don’t.

All in all, the Broadcaster is a fantastic device for streaming video on the go, or as a companion to another webcam you already use. It’s ability to instantly stream to Ustream at the tap of a button makes it extremely versatile, the apps are great for when you want a little bit more control, and the overall experience is simple and seamless.

Logitech has packed a great deal in innovation into the Broadcaster, all while maintaining a very natural and seamless user experience. Add to that the Broadcaster’s great design, excellent build quality, and portability, and you’ve got a winning solution for anyone who needs to broadcast on the go. Frankly, I’ve never seen anything equal to the Broadcaster. Ever. I award the Logitech Broadcaster a full 5 out of 5 stars.

The Logitech Broadcaster retails for $200, and can be found at a variety of online retailers, including Amazon.com (link). For more information, visit Logitech’s Broadcaster page on the web.