Picnics are wonderful, at least until THEY show up! You know who I’m talking about, the ants! UGH! You’ve brought enough food for you and your friends, but the ants are hungry too. How do you protect your food? Why, tap-tap on the ants of course! At least that the premise of the new game from Rise Up Labs, Tap Tap Ants: Battlefield. 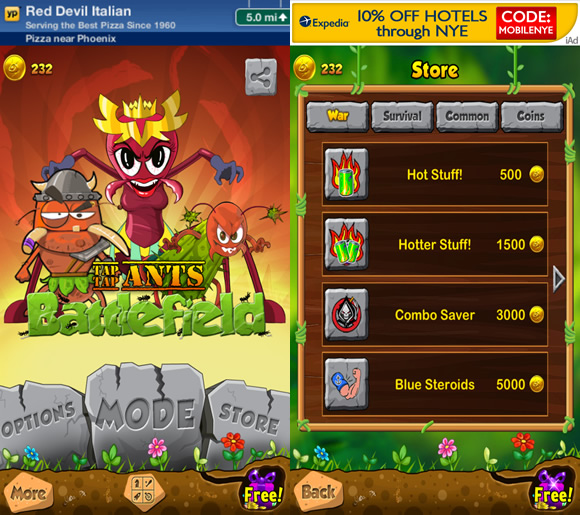 The plot of this fun time-killer (and ant-killer) is that you’ve got food, and the ants want it. Survive and protect your food at all costs! The battle is on between you and the hungry ants.

The ants will rush onto the screen to attack, They way you defend your food is to tap, tap, tap. That’s right, flatten the ants.

In war mode the ants will attack coming from the top portion of the screen, As a classic games player, I can’t help but believe the programmers were influenced by the classic game Galaga when designing this game. The patterns the ants attack in are uncanny in their resemblance to the attackers in that classic space shoot-em up.

In Survival mode, there is a pie in the middle of the screen, and you’re defending it. The ants will attack from all sides, not just the top of the screen, and will be doing their best to take chunks out of the pie. Once the pie is all gone, it’s all over. If you’re a regular reader of MacTrast, you know how we feel about pie! No pie, there’s no reason to go on. Other foods can replace pie, (why, I don’t know), and you can customize the type of food you’re defending along with other options in the customization menu.

You can power yourself up with upgrades, pull of mutil-touch combos, and gain weapons to help you fight off the attacking hoards. There are also rewards that can be unlocked by completing missions.

I found that the game was a great way to kill a few minutes during slow periods, or I could sit and play it for an hour or so. So, as a short, or long time killer, it served well as both.

Survival mode will get you tapping quickly, as the ants show no mercy, they are rushing from all sides, and it’s very difficult to protect the object of their desire in the middle of the screen. I do wish the survival mode started a little slower, but I guess the object of the game is survival, after all.

The game includes the ability to buy extra weapons in the store, which are purchased using coins earned in the game. You can also purchase coins via in-app purchase, or get free coins by liking the game on Facebook, watching videos, or completing certain offers from partners. 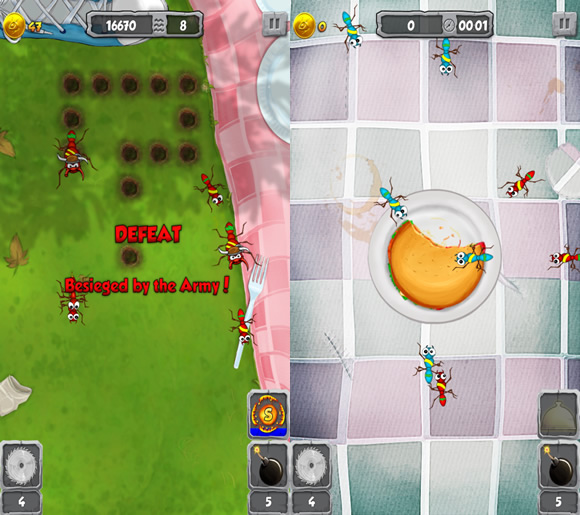 If you like shooting to stay alive type games, you’ll like Tap Tap Ants: Battlefield. The game is great for a time killer while waiting in line or for an appointment, (but please, not while waiting for a traffic light to turn green), or can easily kill a few hours at a sitting.

As mentioned, the survival mode could start out a little slower for my tastes, but that’s a minor quibble. The game is well done, and is an interesting variation on a of game we’re all familiar with.

Price: FREE – Available for iPhone and iPad in the App Store. (DIRECT LINK)