A new survey finds that consumers are quite interested in the possibility of an Apple-branded television, and are willing to pay a 20% premium over the price of existing TVs. 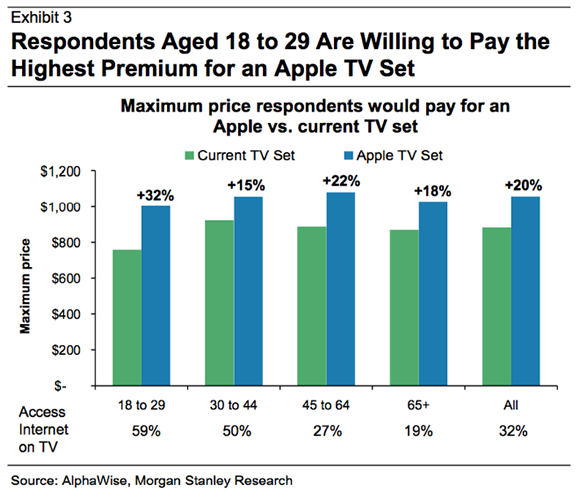 The survey, by AlphaWise and Morgan Stanley, polled 1,568 heads of U.S. households regarding the “smart TV” market. It found that just 18 percent of homes have a smart TV, while 13 percent of respondents said they didn’t know whether their TV is considered “smart.”

Analyst Katy Hubert says this suggests that the Smart TVs currently available to customers don’t offer easy-to-use software to integrate Internet conent into the TV experience. She believes that Apple has a strong opportunity to disrupt the television market, just as the iPhone did for the smartphone market.

The survey found that 11% of respondents said they would be “extremely interested” in purchasing a so-called “iTV” from Apple, while 36% said they are “somewhat interested.” The “iTV” name was used to prevent confusion with the current Apple TV set-top box.

11% “extremely interested” in such an offering from Apple would translate to over 13 million units sold in the U.S. in that group alone. The 36% “somewhat interested” respondents represent an incremental 43 million units.

These potential sales figures are assuming only one Apple television per household, but the survey found that the average home has 2.8 televisions, and 14% of those responding said they would consider replacing “all” of their televisions with Apple’s product. 9% said they would replace “most” of their current TVs.

Respondents are apparently also willing to pay a premium for an Apple television. 46% said they are willing to pay over $1,000, while 10% would cough up over $2,000.

Survey participants said they are most interested in what they believe would be the high screen quality of an Apple product. (The Retina Display halo effect?) They also were very interested in the unit being easy to use, particularly when it comes to searching for content.

Talk of an Apple television picked up again last week, after the company’s CEO, Tim Cook, said in an interview with NBC that televisions are an outdated piece of technology, saying “When I go into my living room and turn on the TV, I feel like I have gone backwards in time by 20 to 30 years. It’s an area of intense interest. I can’t say more than that.”