In the increasingly competitive tablet world, Apple’s iPad maintains a strong edge over its competitors in market share – due largely (in my opinion) to its simple interface, the abundance of tablet-optimized Apps in the App Store, and build quality. But according to U.K. site Which? (via TUAW), both the full-sized iPad and iPad mini dominate the competition in one other important area as well: battery life! 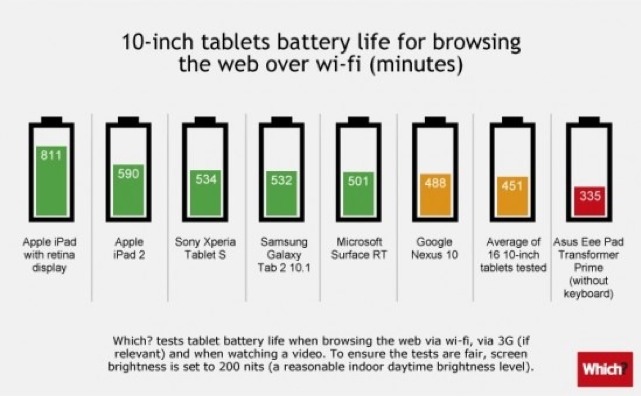 The site tested a number of leading tablets, taking into account screen size and brightness (using a light meter), and found that the iPad consistently trampled the competition in longevity. The full-sized iPad achieved 811 minutes of WiFi browsing on a full charge. It’s closest competitor was the iPad 2, which came in at 590 minutes. The Samsung Galaxy Tab 2 10.1, which came in third, only achieved 538 minutes of usage.

The iPad mini issues a similar beat-down to its 7-8-inch brethren, achieving 783 minutes of WiFi browsing, while its closest competitor, the Amazon Kindle Fire HD, came in at just 591 minutes, followed by the Nexus 7, which came in at 550 minutes.

It’s impressive that the iPad came out as the undisputed leader – but even more impressive are the massive margins the iPad won by – over a third greater battery life! If you needed another reason to buy an iPad over an Android tablet, this is a pretty compelling result!