As a followup to yesterday’s announcement that Tim Cook had made the short list for TIME Magazine’s Person of the Year feature, the mag has published a lengthy profile of the Apple CEO. 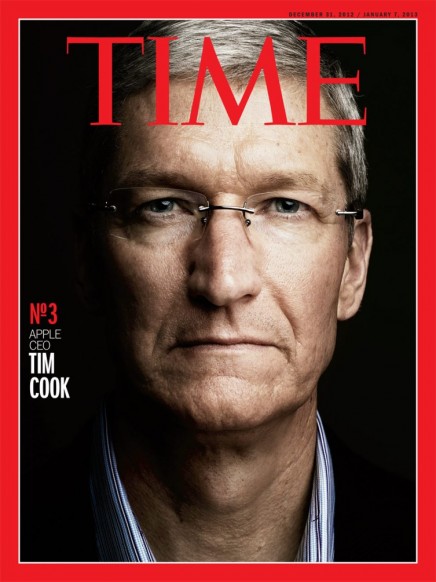 Tim Cook has the decidedly nontrivial distinction of being the first CEO of Apple since the very first to come to power without blood on his hands. For most of its history, Apple has had a succession problem: it had no internal mechanism for transferring power from one CEO to the next without descending into civil war in between. “Each time,” Cook says, “the way that the CEO was named was when somebody got fired and a new one came in.”

Jobs wanted to avoid that happening again, and spoke to Cook about it shortly before he died. “Steve wanted the CEO transition to be professional,” Cook says. “That was his top thing when he decided to become chairman. I had every reason to believe, and I think he thought, that that was going to be in a long time.”

The article re-hashes much that’s already known about Cook, but does a good job of putting it all in one package, offering excellent quotes from Cook about his way of doing things and his time at Apple.

At the time of Jobs passing, Apple was valued at $351 billion. Currently, that figure stands at $488 billion. Apple’s cash pile alone amounts to more than $120 billion. Clearly, Cook is doing something right.

And Cook has done it his way. Jobs was famously over the top: he came at you from across the room, flashing his lightning-bolt eyebrows, and he browbeat you till you either agreed with him or pretended to, just to make him for God’s sake stop. That’s not how Cook operates. He’s a seducer, a Southern drawler, slow and soft-spoken. He has been observed winking. He doesn’t come at you; he waits for you to come to him. And sooner or later you do, not because you have to but because, dang it, you want to.

The article talks about how Cook downplays the differences between himself and his predecessor. “I think there’s some obvious differences,” he says. (He allows himself a chuckle at the understatement.) “The way we conduct ourselves is very different. I decided from negative time zero — a long time before he talked to me about his decision to pass the CEO title — that I was going to be my own self. That’s the only person that I could do a good job with being.”

The article covers Cooks history in the business world, A degree in industrial engineering from Auburn University in 1982, 12 years at IBM, a stint at Intelligent Electronics, and then in 1997 to Compaq as vice president for corporate materials. Standard stuff. Then he took a different turn.

Almost immediately after he arrived at Compaq, Cook began to get calls from Apple’s headhunters. Jobs was back from exile — he was pushed out from Apple in 1985, then rehired 12 years later — and he wanted to bring in somebody new to run operations. …so Cook sat down with him one Saturday morning in Palo Alto. “I was curious to meet him,” Cook says. “We started to talk, and, I swear, five minutes into the conversation I’m thinking, I want to do this. And it was a very bizarre thing, because I literally would have placed the odds on that near zero, probably at zero.”

Cook got home on Sunday. Jobs offered him the job on Monday. On Tuesday, Cook resigned from Compaq.

The article then covers Cook’s early time at Apple, working behind the scenes, working on Apple’s supply-chain management, improving, aligning, until the machinery ran faster and smoother than it ever did.

Also covered is Cook’s time as CEO, the ups and downs Apple has gone through since his taking the CEO position.

Apple also met with some serious and very public reversals in 2012. The labor practices of its Chinese manufacturing partners’ factories continued to be a source of embarrassment. September saw the distinctly un-Apple-like launch of Apple Maps, which was buggy and reportedly misinformed as to the location of landmarks like Washington’s Dulles International Airport. These were, if nothing else, opportunities for Cook to show off his chops as a swift, steely decisionmaker.

The TIME article should be required reading for anyone who would like an insight into Tim Cook, and his vision for Apple’s future. Say what you want about the Apple CEO, but I for one think Apple is in good hands.

The full profile of Tim Cook can be found at the TIME website. (Direct Link)