Lytro pioneered a new type of camera this year that allowed you to refocus the image after you’d taken it, which is probably the biggest camera revolution since digital. However The Asahi Shimbum (via Cult of Mac) reports that Toshiba is developing a smaller Lytro-style sensor, which could potentially allow smartphone or iPhone users to refocus after the image is taken. 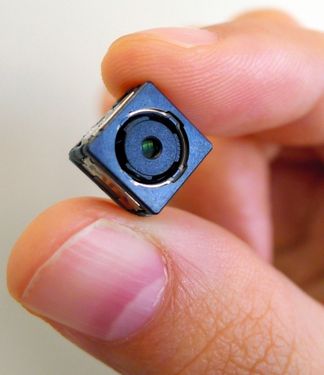 The cube-shaped module is about 1 centimeter per side and contains a dense array of 500,000 lenses, each 0.03 millimeter in diameter, in front of an image sensor measuring 5 mm by 7 mm. The same mechanism works similar as the way the compound eye structure functions in insects.

Those 500,000 lenses each takes one tiny picture, from which the camera can measure the distance to the object. The camera then adjusts the focus as desired by magnifying and superimposing the images needed.

Unlike the Lytro, Toshiba’s version also has video functionality.

It will be commercialised ‘at the end of fiscal 2013’, however I imagine that many of the big tech companies already have their eyes on this. Could we be seeing this in a future iPhone? Quite possibly.