Took ’em long enough, but Tumblr has finally released an update to its iOS app that adds full compatibility for the iPad line of tablets. 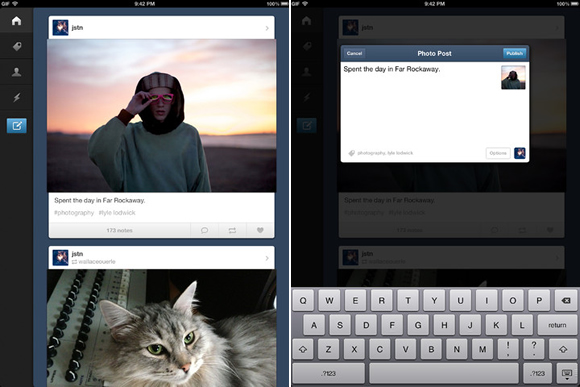 Tumblr built for the big screen includes sleek sidebar navigation buttons, a new radial menu for composing posts, and of course“native” elements that make posts load a whole lot faster. Like its iPhone counterpart, the app is incredibly responsive and includes all the same bells and whistles, like being able to hold the reblog button for quick reblogs, and pinch and zoom to examine pictures.

The update also includes nice iPad-only touches like landscape support, a radial menu for posting, and a persistent navigational sidebar that’s with you no matter what screen you’re on.

The app only took a few weeks to create, thanks to the months Tumblr already spent this summer updating its iPhone app to native iOS code. “Once we had all those building blocks in place, we were ready to go for iPad,” developer Bryan Irace says. “It hasn’t been something that fell on deaf ears. All of us at Tumblr really wanted it too.”

Tumblr is available in the App Store – FREE (Direct Link)