We’ve reviewed multiple Inateck products in the past, from their cool MacBook sleeve, to their Bluetooth speakers, to their USB 3.0 Hub with built-in ethernet connector, and we’ve really liked them all. Now, the company has given us the opportunity to try out their HB4009 USB 3.0 3-Port Hub w/ Magic Port. 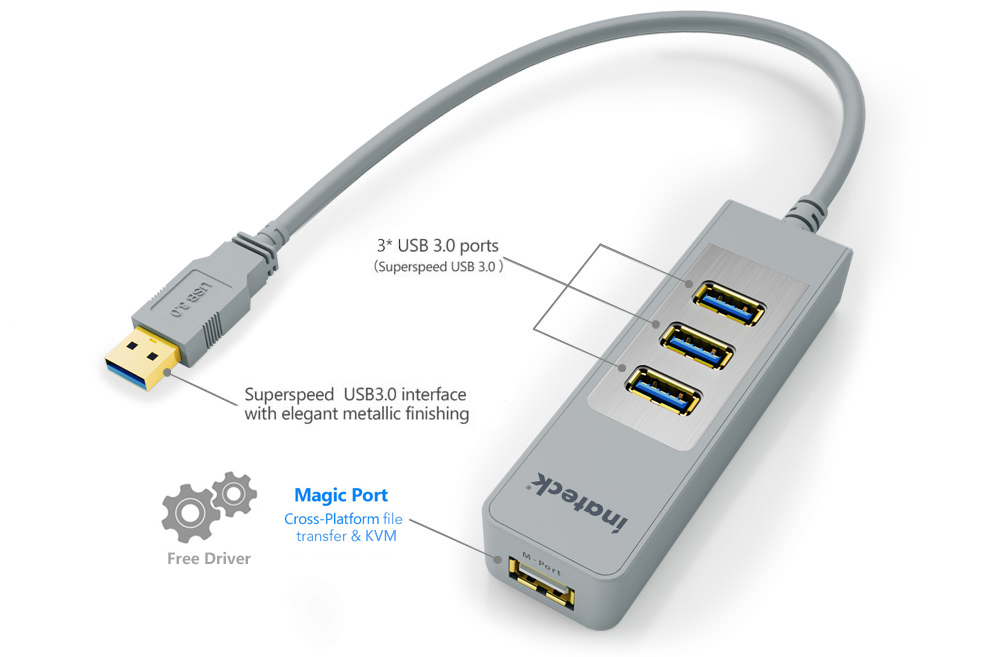 What’s a Magic Port, you ask? It’s a great little feature that helps you connect two Macs or PCs, or even an Android device, (sorry, no iOS device support yet), and transfer files, and even remotely control each other, all via their USB connectors. It also acts as a really nice 3-port USB 3.0 hub.

The Inateck HB4009 USB 3.0 3-Port Hub w/ Magic Port is a compact accessory that plugs into your Mac’s USB port. While the hub is USB 3.0 compatible, all I had available was an older MacBook Pro with USB 2.0 ports, but I can report that it worked great, just slower than 3.0 would have.

The HB4009 can be used as a normal 3-port USB hub, which can definitely come in handy, considering my MBPro only has 2 USB ports. Sure, there are other USB hubs available that offer quite a few more ports, but they can’t do what the HB4009 can.

On the end of the 3-port hub is what Inateck calls the “Magic Port.” Included with the HB4009 is a cable that has a male USB connector on each end. Once you’ve plugged one end of the cable into the Magic Port, you plug the other end into another Mac, PC, or using the included adaptor, an Android device. This is where the magic happens.

Inside the HB4009 is a small bit of storage that holds software for both the Mac and PC that enables file transfer and remote control on both computers. You can go Mac to Mac, Mac to PC, or PC to PC. Once you install the included transfer software on both computers, you are ready to go.

I found the software to install quickly and easily on both my Mac, and the PC I used for testing. (It’s an old 2009 desktop Compaq computer. What can I say, I write for a living.)

Once I installed and ran the apps on both machines, I was instantly connected, and was able to read the drives of either computer from the other machine. As a nice touch, I was also able to remotely control each machine from the other one, with no lag. While I don’t have much use for this feature, I’m sure many road warriors and IT professionals can think of multiple uses for side-by-side remote control. 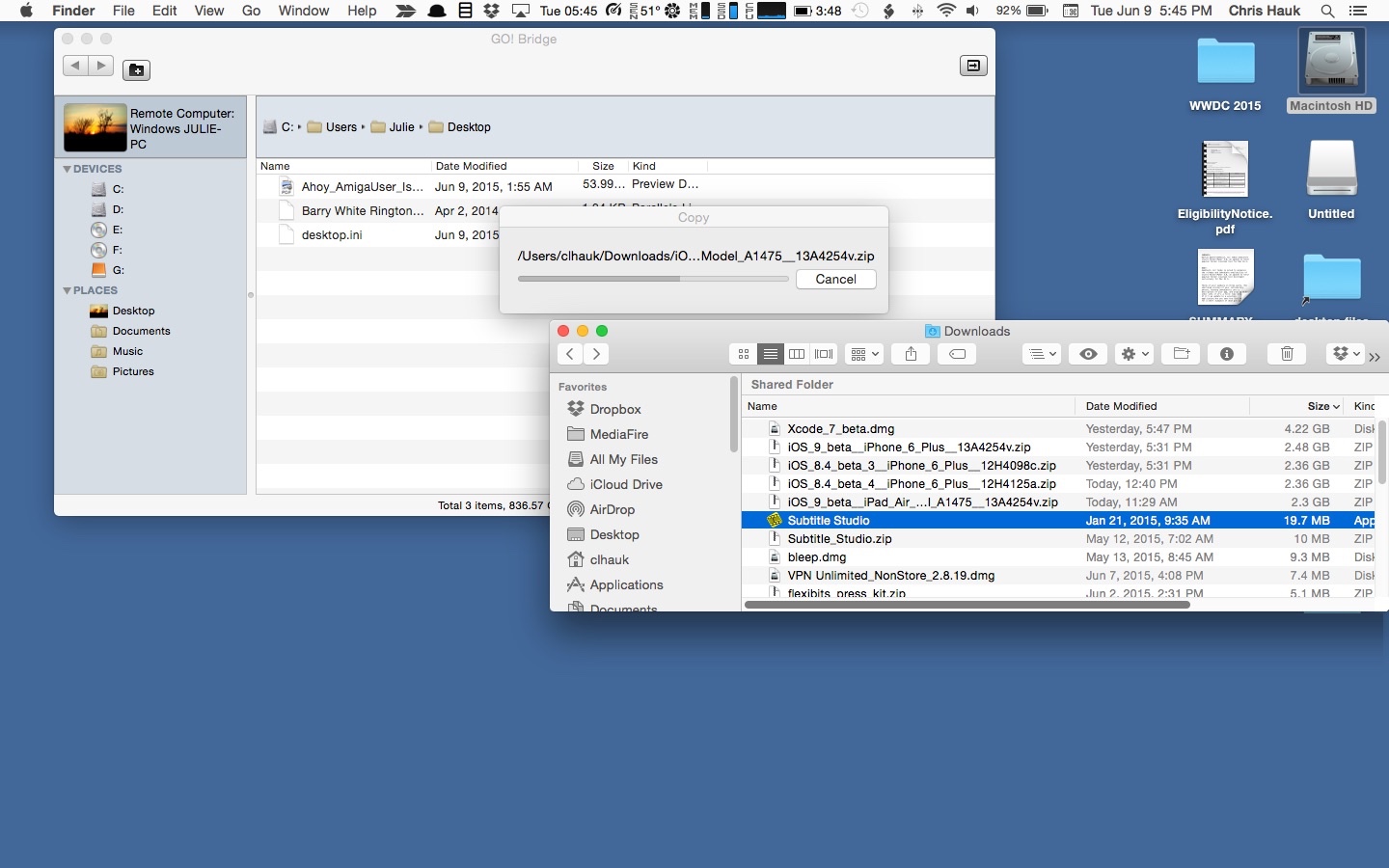 As far as file transfers go, I was using two older computers with USB 2.0 ports, however the file transfers were speedy enough for my tastes. I as able to transfer a 57MB PDF file in just over 5 seconds, while a 2.3GB ZIP file took 3:02 to transfer. (For a comparison, I transferred the same 2.3GB ZIP file to an external USB 2.0 hard drive, and it took just over 2 minutes.)

In both cases, the file transfers went smoothly, with no errors, and both files were able to be opened on either computer following the transfers.

The HB4009 also allows copy & paste of information from one machine to the other, which is a nice touch.

I was unable to try the Android remote control and file transfer portion of the HB4009, due to a lack of Android device in my house. I did read up on the process, and it involves a download form the Google Play Store for the Android, and a connection with the supplied Android connector. You can see how that all works on YouTube video created by user Oscar 50. 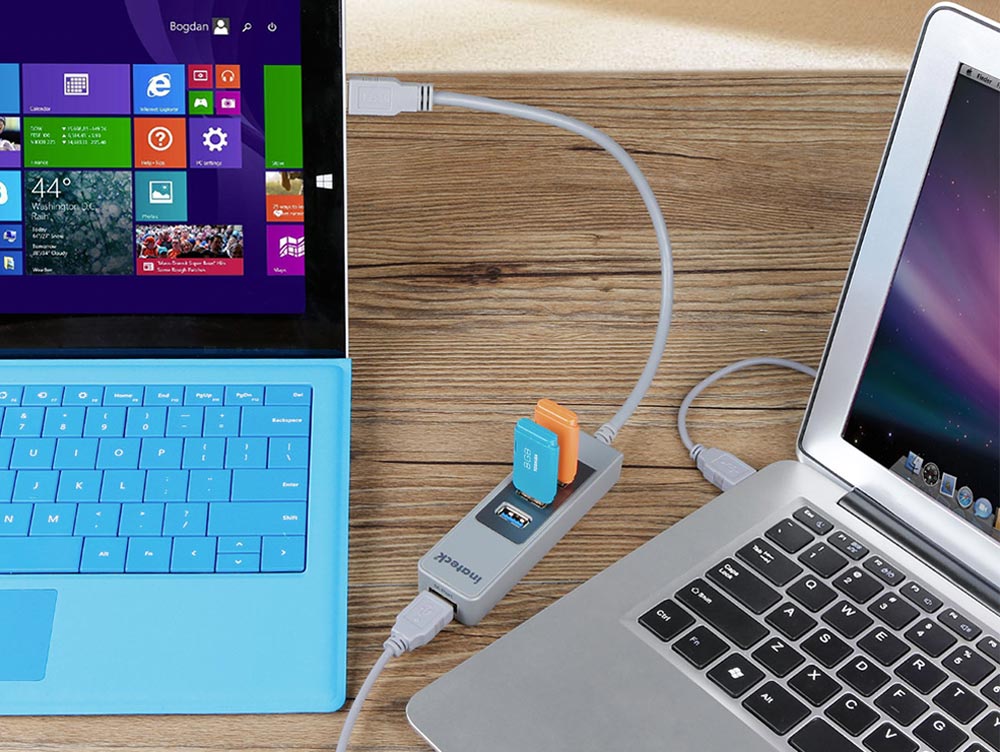 I have to say, the Inateck HB4009 USB 3.0 3-Port Hub w/ Magic Port is a great little accessory to have in your bag of tricks. It works great as a USB 3.0 hub, and the Magic Port computer-to-computer transfer abilities would definitely come in handy for those who want a quicker method of file transfer than loading up a USB stick, copying the files to it, and sneaker-netting it to the other computer.

At a current price of just $24.99 on Amazon, the Inateck HB4009 USB 3.0 3-Port Hub w/ Magic Port  is a great value for users who need a few extra USB ports, as well as having the option for relatively speedy file transfers.

Disclaimer: I received the above product at no cost for review. I did not receive compensation for this review. All thoughts and opinions are my own. All product photos courtesy of the manufacturer. Software screenshot was taken by me, on my Mac.