Apple CEO Tim Cook accepted his Visibility Award at the Human Rights Campaign dinner on Saturday night, and spoke about coming out as gay, and the obstacles that still remain about LGBT acceptance. 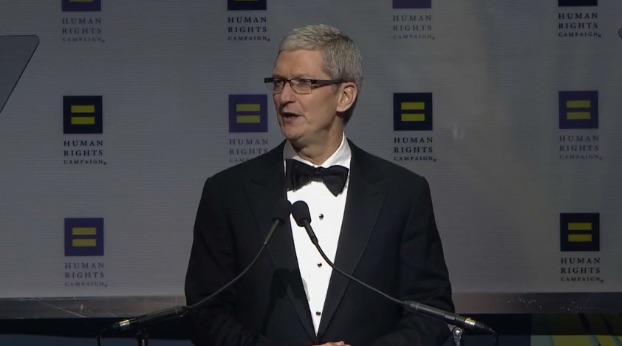 Making reference to things like this summer’s Supreme Court ruling on gay marriage, Cook suggested that the U.S. was closer than ever to achieving Martin Luther King Jr.’s goal of people being judged solely on their character. He noted however that that the country isn’t there yet, and that LGBT people are still sometimes bullied, seen as defective, or even sent off for “reparative” treatment.

“People need to hear that being gay does not give you limitations in life,” said Cook.

“Through his example and Apple’s commitment to equality, LGBT young people in particular can look to Tim Cook’s incredible career and know that there is nothing holding them back,” HRC President Chad Griffin while introducing Cook.

The keynote address was delivered by Vice President Joe Biden, who said “there’s no longer any questions” that transgendered people should be able to serve in the U.S. military.

While Cook’s sexuality was considered an “open secret” for some time, the Apple CEO officially came out in October 2014, saying he hoped to inspire others. While Apple has long been a supporter of equal rights, the company has become more involved that ever in supporting LGBT causes under Cook.