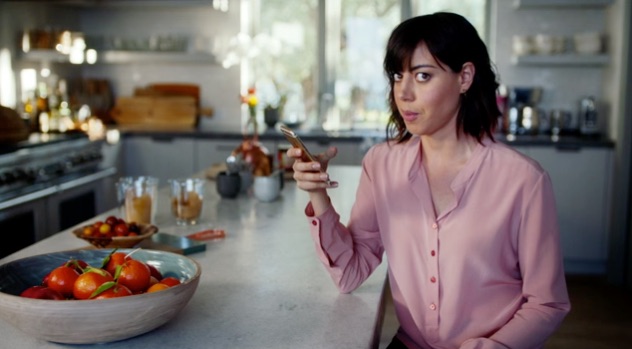 Video one highlights Live Photos, the animated photo format that debuted alongside the iPhone 6s last fall. (Finally, cat photos that aren’t ruined when the cat turns his head at the last minute! – Ed.)

“Live Photos are more than just photos. They come alive when you touch them. And, then they go back to still when you let go. So every time you take a picture, you get more then just a photo. You get to… re-live the moment. Because it teleports you through space and time. (WTF reaction from actors on screen.) I’m kidding. Time travel is dangerous.”

The second video released on Wednesday highlights the 3D Touch feature on the iPhone 6s, showing off Quick Actions form the Home Screen, and in-app “Peek” and “Pop” features. In a humorous touch Quirky actress Aubrey Plaza is shown getting so involved in playing with Peek and Pop to view her flight information, she misses her flight.

“3D Touch on the iPhone 6s responds to the pressure of your finger. So, you can do a ton of stuff in a lot less time. Like, look at a flight without going to it…”

The ads are just the latest in a series of humorous ads Apple has produced to highlight the new features of the flagship iPhone 6s and iPhone 6s Plus handsets. Previous ads have highlighted always on “Hey Siri,” the powerful A9 processor, and more.