If you listened to commercials for the big four wireless carriers, you’d think they all supply the fastest LTE speeds around. The fact is, none of them offer anywhere near the fastest speeds in the world. Far from it. 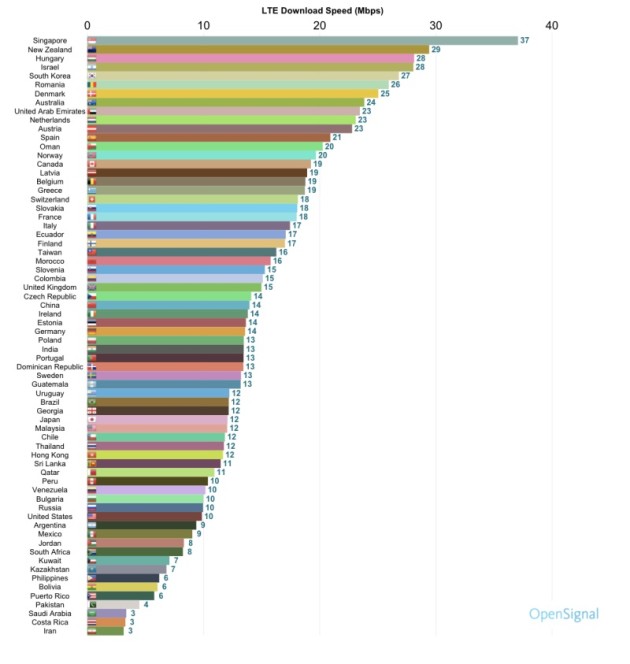 According to data from OpenSignal, the U.S. ranks at a measly 55th in the world, far from the speeds enjoyed in countries like Singapore and New Zealand. Countries such as Peru, Thailand, Chile, Ireland, China, Italy and others squeak past the U.S. in terms of speed—but those aren’t even in the top 10.

Singapore, New Zealand, Hungary, Israel and South Korea fill out the top 5. Other countries near the top include Spain, Austria, Netherlands and Australia.  On the bright side, the U.S. actually jumped a few places in the LTE speed race since last year, so there is still hope.

OpenSignal says LTE speeds here in the U.S. are about 10Mbps down, which isn’t too shabby, and more than enough for streaming content, but that 37Mbps download speed in Singapore sure looks sweet.

It should be noted that compared to the land mass that U.S. carriers have to attempt to cover, the top countries are tiny in comparison, so it’s a bit easier for carriers in those countries to provide fast coverage. The U.S ranks 7th when it comes to actual LTE coverage, which again, is covering a lot more square miles than many of the countries in the study. (South Korea ranks number one.)