Apple has begun to notify the lucky recipients of one of the 350 scholarships to its Worldwide Developers Conference 2016 in June. Apple is awarding the WWDC 2016 scholarships to students and members of participating STEM organizations. An additional 125 scholarships are going to developers who face financial limitations. 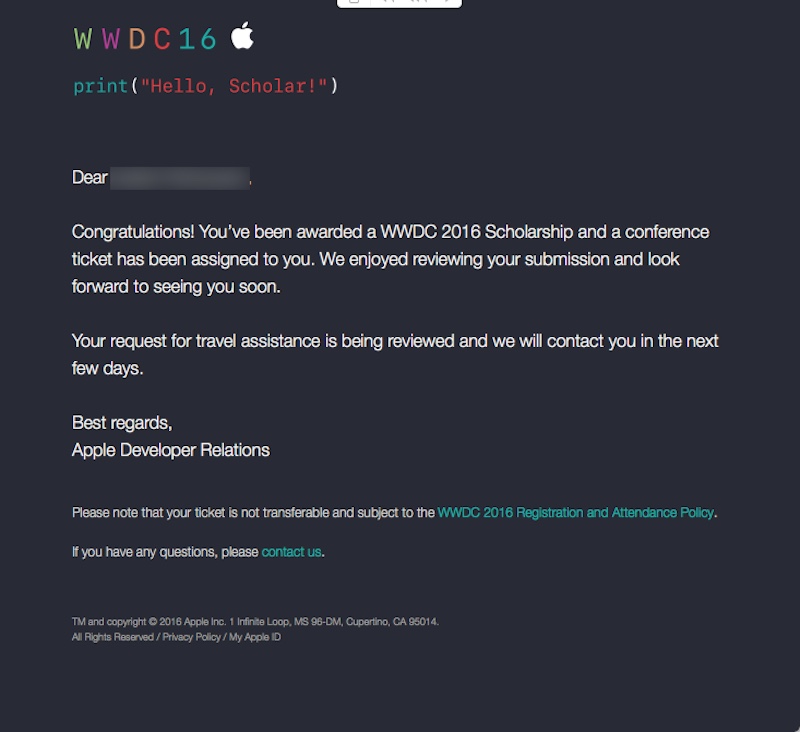 … To be eligible, developers had to be 13 years or older, a full or part-time student or a member / alumni of a STEM organization. Developers had to submit an app they worked on that demonstrated “creative use of Apple technologies and runs on an Apple platform.”

A number of developers on social media have begun posting that they received a WWDC 2016 scholarship from Apple. The winners receive a free ticket to WWDC 2016, and in some cases, will receive travel assistance to the event.

WWDC 2016 takes place at Moscone West in San Francisco, California, running from June 13 to June 17. The keynote, however, will take place at the Bill Graham Civic Auditorium, due to its ability to accommodate more attendees, Apple is expected to debut new versions of iOS, OS X, watchOS, and tvOS at the event.

The rest of the event will offer attendees the chance to meet with over 1,500 Apple engineers, and the opportunity to attend over 100 tech sessions and hands-on labs. Apple will also offer live streaming of the WWDC sessions for those unable to attend.