It’s been a great party, but damn, you could really go for a burrito. Sure, it’s 1 in the morning, but there’s gotta be a place open around here somewhere, right? Make sure you’ve got Burrito AF loaded on your iPhone, and you’ll never go hungry. Well, as long as you have enough money left for a burrito, that is… 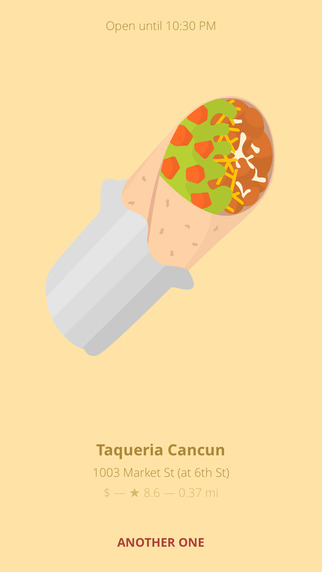 A compass to your next burrito.

Whether it’s a heavy bar night, happy hour or just a casual dinner, finding the closest taqueria for a kick-ass burrito is sometimes hard. Especially if it’s past midnight and you’re hopelessly wandering around the city looking for the perfect meal to end your night with.

BURRITO AF is your companion for exactly these moments and will guide you safely to the next taqueria serving you a mix of delicious ingredients wrapped in a huge flour tortilla.

Yeah, it sucks that they’re only in those four California locations at the moment, but there’s hope. The developer says to let him know where you’re located, and if enough people ask for a certain area, well… So, that means there hope for getting Chicago or New York City added to the app, and not so much of a chance for Franklin, TN, but…

BURRITO AF is free, and is available for the iPhone in the App Store. [GET IT HERE]