A new study by payments processor Square found that customers who use Apple Pay and other forms of NFC payments were more likely to tip than those who used regular credit cards. 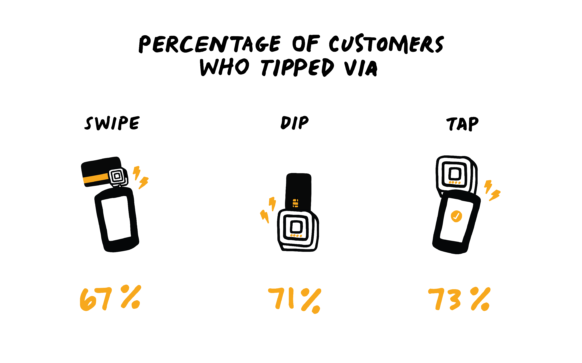 Square’s findings come from a six week look at the Portland market, and the “thousands” of Portland sellers who use Square’s new contactless and chip reader. During that time period, 67% of customers who swiped their card left a tip, 71% who used EMV card tipped, but the group that used their NFC-equipped smartphones to pay tipped most often, with 73% of them leaving a little extra for the server.

Square chose Portland for the study due to its high number of orders for the company’s contactless and chip reader.

Even before #PayFasterPortland, the city was number one in the country for orders for our new contactless and chip reader. And now the rate of people in Portland paying on Square’s new reader with mobile wallets like Apple Pay is higher than the national average.

In addition to collecting the tipping habits of Portland residents, Square also collected some interesting data on what they bought. Specifically, what kind of coffee they preferred when paying with their mobile wallets.

While these figures are only from one market, the study does offer a good look at how accepting Apple Pay and other NFC payments systems can increase a business’ income.

Square launched their NFC card reader earlier this year, and the device can be found at Apple Retail stores, Best Buy, and directly from Square. Square will even finance the purchase of the $49 unit. The cost of the reader is payable via 60 weekly payments of $1 per week. That’s an $11 premium over the usual $49 cost of the reader, but it lets you pay it off over a little over a year’s time.