Apple on Wednesday seeded the first betas of iOS 10.1, watchOS 3.2, and tvOS 10.1 to developers for testing. The releases come just a little over a week following the public release of iOS 10, watchOS 3, and tvOS 10.0.1. 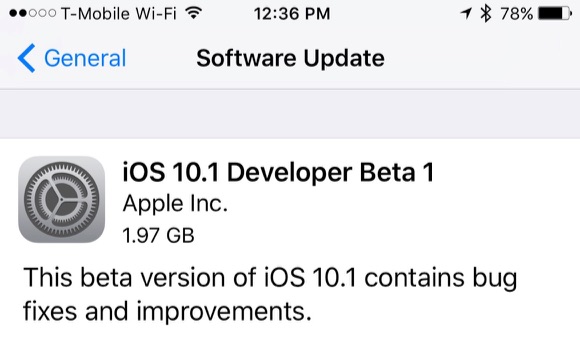 Today’s new iOS 10.1 beta seed – build 14B55c – is available as an over-the-air update to developers who have the beta configuration profile installed on their iOS devices.

9to5Mac reports the following changes have been found in the iOS 10.1 beta seed so far:

We’ll report any further findings in this space.

The first watchOS 3.1 beta – build 14S452 – can be downloaded through the dedicated Watch app on an iPhone running the iOS 10.1 beta by going to “General” -> “Software Update.” The Apple Watch must have 50% battery life remaining, be placed on an Apple Watch charger, and it must be in range of the iPhone.

watchOS 3 introduced a number of significant changes to the Apple Watch operating system. A new dock, several performance improvements, new navigation features, watchfaces and apps, new fitness-related features, and much more are available in the new version. Currently, it isn’t known what changes are present in the first beta of watchOS 3.1, but we’ll keep you posted in this space.

tvOS betas are a bit more involved to install than beta updates for iOS and OS X. Users must connect the Apple TV to to a computer with a USB-C to USB-A cable, and install the update via iTunes or Apple Configurator. However, once a beta profile has been installed on the device, new beta releases are available over the air.

tvOS 10 also offers a dark mode for an improved viewing experience in dark rooms, and new features for Photos and Music.

Currently, we don’t know what changes are included in the first beta seed of tvOS 10.0.1, but we’ll keep you posted in the space as we find out more.

(This article has been updated to include the correct version of the tvOS beta.)