Bloomberg reports that Apple has hired “scores of healthcare experts,” in recent years, to aid in development of improved electronic health record software that can better analyze and understand collected patient health data via HealthKit. 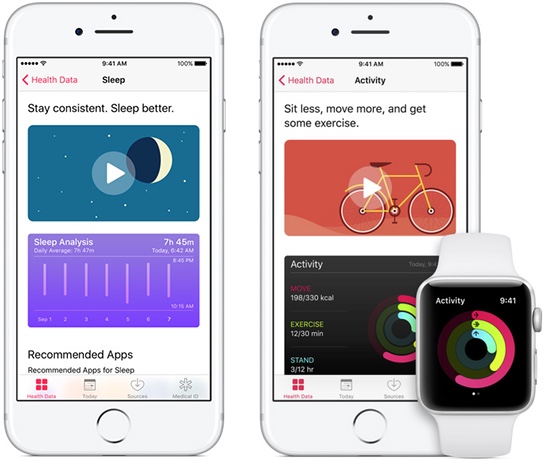 The ultimate goal of Apple’s medical technology team is to turn HealthKit into a tool that improves diagnoses, the people said. The system could chip away at two problems that plague the industry and have stumped other specialist firms in the field: interoperability — allowing data to be transferred from hospital to hospital across different databases; and analysis — making it quick and easy for physicians to extrapolate salient information from mountains of data.

If Apple’s efforts prove successful, HealthKit could turn into a powerful tool that could eventually be used to interpret health and fitness data, as well as provide helpful advice to doctors and patients.

The company is reportedly working on two new Apple Watch apps. The first will track sleep patterns, while the second will gauge the time it takes for heart rate to fall from peak to resting level. watchOS 3 can currently measure and track a user’s heart rate, but offers no interpretation of the numbers. Sleep tracking is limited, as the wearable’s limited battery life usually requires users to recharge the device overnight, limiting the feasibility of wearing the device while sleeping.

Apple isn’t expected to add more sensors to the Watch, as health-care consultants say that would serve a limited purpose, noting that an accelerometer, which is already included in the Watch, can track much of the useful data to monitor a user’s well-being. Adding a glucometer or blood pressure sensor would offer limited utility to most users. Plus, adding any new sensors would likely require approval from the U.S. Food and Drug Administration.

“If they are going to an FDA device, it would need to have enough battery life to last a day, and something where it independently functions from your phone,” said Yuri Teshler, a health-care consultant at Moor Insights & Strategy. Apple can’t really do anything more with health-related sensors until the watch has a wireless LTE chip and the independent cellular connection that comes with that, he added. Apple has so far struggled to do that.