Matthew Roberts has once again shared with us his latest 4K drone footage from high above Apple’s “Spaceship” Campus 2 construction project, and the new footage shows a main building glass panel installation project that’s nearly complete, as well as further progress on the parking situation, fuel cell installation, and more. 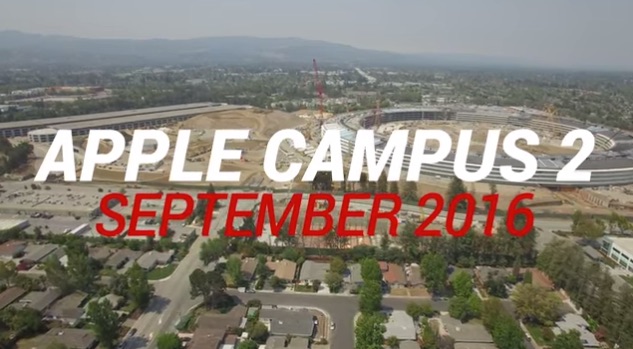 As seen in the video, the interior of the main building on the new campus is almost completely encased in the massive customer glass panels that Apple had made for the project. the panels measure up to a mind-boggling 46 feet wide, and 10.5 feet tall.

Much progress has been made on the new auditorium, whose lobby is now completely built-out, and well clad. Bicycle parking for the campus looks like it’s coming along nicely, as are the fuel cells and generators being installed near the highway.

The parking garage appears to be nearing completion, as the paving looks to be complete on its bridges and ramps. The huge dirt pile we’ve seen in previous videos continues to shrink, as the dirt is used to bury a number of structures with their planned earth covering.

The Apple Campus 2 “Spaceship” project was announced by late Apple co-founder Steve Jobs back in 2011. When completed, the 2.8-million-square-foot “Spaceship” structure is expected to provide working space for over 12,000 employees. A number of green features, including solar cells and fuel cells, green landscaping, and other features, have been included in the project.

The Campus 2 project is expected to be ready for occupation by the end of 2016, while neighboring facilities’ construction work will continue into 2017.