This iOS 10 & Swift 3 Starter Bundle teaches you everything you need to know about developing apps for Apple’s latest and greatest iOS 10 operating system! 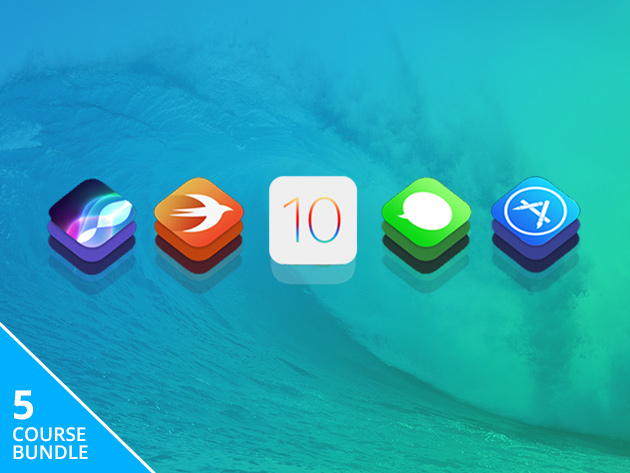 With the launch of iOS 10 upon us, there is no better time to learn mobile app development than right now! In this straight-forward course you’ll learn how to build for iOS 10 by building real, functional apps. If you’re interested in scoring six-figure developer jobs or earning passive income by creating your own apps, then this is a great place to start!

Stay Tech Forward & Learn All About the New iOS 10 APIs

The mobile app industry is constantly innovating and growing, and one of the biggest splashes recently is the launch of Apple’s iOS 10. It’s essential that developers stay ahead of the curve if they want to be successful, and this course will take you on a coding journey to discover all of the new APIs in iOS 10. After building these 7 projects, you’ll be ready to start creating your own apps that capitalize on the new opportunities offered in iOS 10.

Swift 3, the newest version of Apple’s official coding language, has arrived in the wake of iOS 10, which means it’s time for developers to catch up by learning Swift 3 now! In this course, you’ll dive into all the updated Swift syntax while reaffirming general programming concepts. Using hands-on demos and examples, you’ll learn Swift by using Swift, and get ready to start building apps for iOS 10.

Knowing general iOS programming concepts is great, but it’s more valuable to really understand how to use the newest iOS 10 features to create useful, unique apps. Over this course, you’ll use objective-C and the new Swift 3 language to construct real apps that utilize the most innovative features of Apple’s new operating system.

Jump Aboard the iOS 10 Revolution by Building Real World Apps

Take a practical approach to iOS 10 and Swift 3 in this 26.5 hour course that will teach you app programming by actually building real world apps. The course is structured to cover the basics first, elevating as you go along to the point where you’ll be constructing amazing, unique apps like it’s nothing.