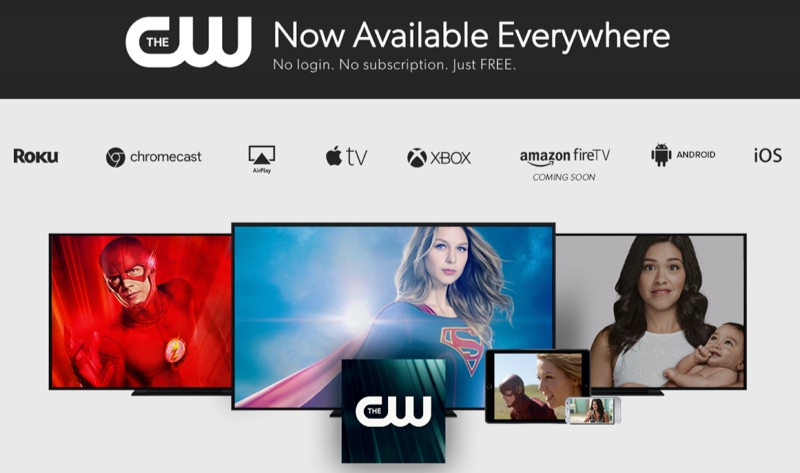 The CW also updated its iOS app on Thursday. The iOS version of the CW app gains streaming support for both Apple’s AirPlay and Google’s Chromecast. The new tvOS app gets rid of the need for AirPlay for fourth-generation Apple TV owners. Neither the iOS or Apple TV app requires you to go through the “prove that I have a cable subscription” bullcrap of similar apps from other networks, so it’s basically click and view for both apps.

(Requiring a cable subscription to view streaming of over the air programming that you can get with an antenna has always been freaking stupid in this reporter’s humble opinion. But I digress…)

The CW has become popular with a number of viewers due to its infatuation with DC superheroes. (The CW is partially owned by Warner Brothers, which also owns DC Comics, so you do the math.) The network features “The Flash,” “Arrow,” and “DC’s Legends of Tomorrow,” and this year “Supergirl” moves over from another CW owner, CBS, and that move allows the network to cover four nights a week with heroic yet flawed men and women in tights, leather, and short skirts.

The network is also home to such popular shows as: “Jane The Virgin,” “Arrow,” “The Vampire Diaries,” “Frequency,” “iZombie,” “DC’s Legends of Tomorrow,” “Supernatural,” “The 100,” “Crazy Ex-Girlfriend” and “The Originals.” (“Crazy Ex-Girlfriend” is one of my guilty pleasures. It is hilarious, check it out on Netflix sometime, where the first season is available for bingeing purposes.)

In addition to streaming full episodes of CW shows, users can also receive notifications about new shows, and get access to oh-so-enjoyable content, such as behind-the-scenes footage, interviews, and if there aren’t blooper reels hidden in there somewhere, I’d be REALLY surprised.

Features Include:
* FULL EPISODES: Watch the latest episodes of every primetime show the day after broadcast
* NO LOGINS: No cable subscription, no credit cards, no passwords. Ever.
* PUSH NOTIFICATIONS: Get reminded when your favorite shows air and when they’re available to watch in the app.
* EXTRAS: See previews for upcoming episodes, behind-the-scenes extras, cast interviews, and more.
* PHOTOS: Browse extensive photo galleries for episodic and publicity stills.
* FREE ACCESS TO CW SEED: Binge on new classics like The OC, digital series like DC’s Vixen, and every episode of Whose Line.