Apple has officially discontinued the third-generation Apple TV, and has removed it from its online store. Apple has confirmed the death of the device in an email to employees and educators, which was obtained by 9to5Mac. 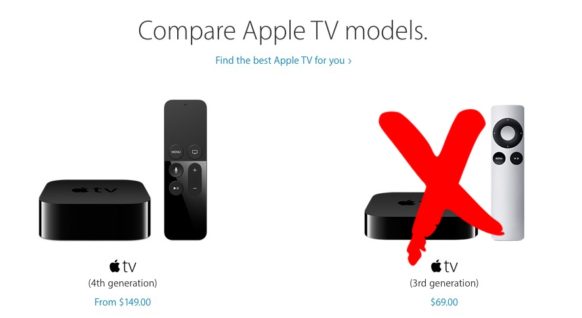 While the company had previously removed the device from retail store shelves and the Apple TV purchase page on their website, users could still go to the device’s purchase page by entering the page’s URL manually. That address now redirects users to the page for the fourth-generation model.

Any back orders for the device will be fulfilled, and refurbished versions of the 3rd-gen set top box are still available for $59. As we reported in early September, Apple at that time began phasing out the older model, removing it from store shelves and deleting it from the Apple TV page on their website.

The third-gen Apple TV first debuted in 2012, and received an update around a year later, since then, all of Apple’s development and content love has been bestowed on the 2015 fourth-generation model, which offers the ability to run apps, play games, and offer Siri search features not available on the “antique” model.

The fourth-generation Apple TV is available from Apple’s online and retail stores, and third-party resellers  in two configurations: 32GB ($149) and 64GB ($199).