You may recall that back in June 2015 we reported Apple would be revamping its iconic Fifth Avenue “Cube” retail store, and would temporarily relocate to the vacant FAO Schwarz toys store in the nearby General Motors building. It’s finally happening. 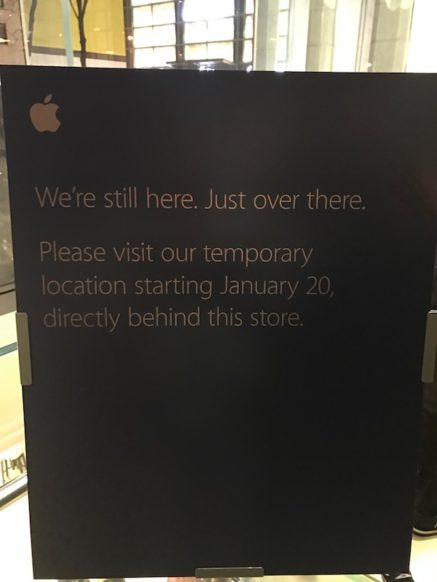 A MacRumors reader spotted a new sign in front of the iconic store that reveals the relocation will happen on January 20.

FAO Schwarz vacated its ground-level store in the General Motors Building in July 2015 due to the location’s rising rent. The location is located mere steps away from the Fifth Avenue Apple Store, so customers should be able to find the temporary location with few problems.

The Fifth Avenue Apple Store is one of many that the Cupertino firm either has plans to renovate or is in the process of renovating. The most recent renovation to the Fifth Avenue store took place in 2011, when Apple had larger, seamless panes of glass installed in the landmark cube.

In related news, rumors are flying that Apple is in the planning stages for a new downtown Brooklyn retail location. Apple’s opened its first retail store in July 2016, and rumors about a second store started circulating soon after that store opened.

The rumored location is in Fort Greene, near downtown Brooklyn. The Real Deal reported in November that Apple signed a 10-year lease for the new location. The new retail space is said to be located at the base of Two Trees Management’s new 32-story mixed-use tower at 300 Ashland in Fort Greene, which is near the Barclays Center arena and is just a short walk away from the Atlantic Terminal, Brooklyn’s largest transportation hub.