It’s been close to four months since Apple released iOS 10 to an eager public, and the latest install numbers from Apple show it is now running on 76% of all active devices. (Via Apple’s App Store Developer page.) 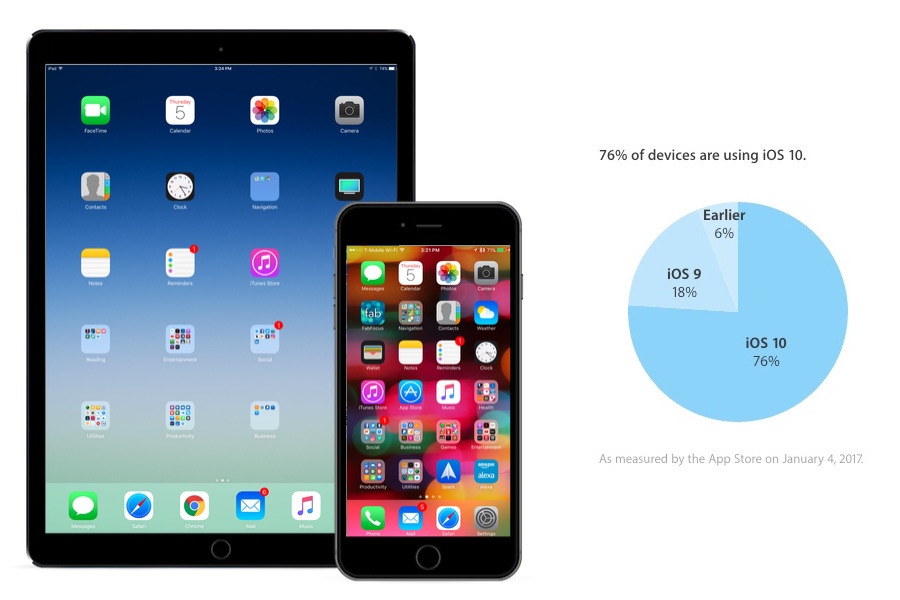 iOS 10 installation numbers have grown nicely since the last time we checked in, leaping by 13 percentage points since the end of November 2016. At that point in time, iOS 10 was installed on 63% of active devices. iOS 9 is being run on 18% of devices, and 6% of devices are running iOS 8 or earlier.

Install numbers for iOS 10 are running neck and neck with iOS 9 numbers for the same timeframe last year. iOS 9 was installed on 75% of active devices one year ago, 1% behind the current iOS 10 install numbers.

Apple’s most recent update to the iOS 10 operating system, iOS 10.2, was released on December 12, 2016, and likely aided recent adoption numbers, as it introduced several new features. The new features include a “TV” app, which acts as a TV guide that simplifies the viewing experience on iOS devices, and on the fourth-generation Apple TV.

In addition to the TV App, the update has also included the much-anticipated Single Sign-on feature, which allows users of iOS devices to sign in once using their cable or satellite credentials, and view content in various apps offered by content suppliers. Single Sign-On is available for DIRECTV, Dish, GTA, GVTC Communications, Hawaiian Telcom, Hotwire, MetroCast, Service Electric Cablevision, and Sling TV.