The Swift 3 Master Coder Bundle teaches you to develop iOS 10 apps in Swift and Objective-C by using the proven method of watch, learn, build. 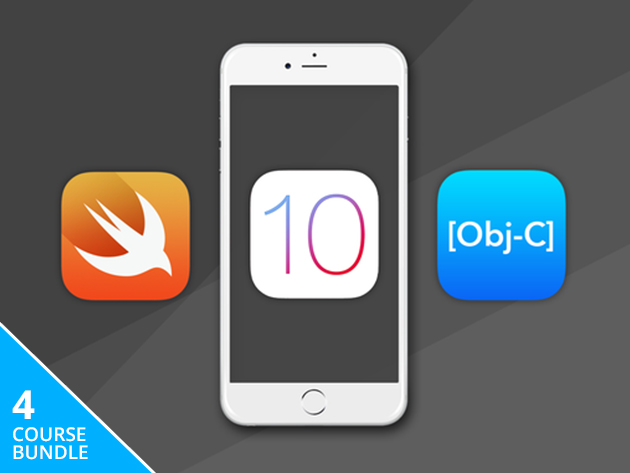 The best way to learn how to code iOS 10 apps is by actually building iOS 10 apps. In this course, you learn while making real-world iOS projects, applying your new skills immediately. Completely covering all aspects of Apple’s official programming language, this course will also make the perfect reference toolkit, giving you a portfolio of completed apps that you can continually revisit to understand how to tackle future programming problems.

Swift 3 is the latest iteration of Apple’s official programming language, and it has been optimized for programming iOS 10 apps. This course’s goal is increasing your chances of building apps that are accepted on the App Store and dives into the fundamentals of Swift while introducing you to Swift 3’s new features. As you develop an understanding of this programming language, you’ll start building small apps, learning the skills you need to create more complex ones in the future.

Start building professional-quality, fully-functional iOS apps with this comprehensive course on Objective-C and Apple’s programming tools, Xcode 8 and Swift 3. Throughout the course, you’ll create over 20 real iOS 10 apps, from games to utility apps that optimize the native features of iOS 10. By course’s end, you’ll have a portfolio to be proud of, and the skills to start building a career in app development.

Start Coding for iOS Without Any Prior Experience

Swift 3 is one of the hottest programming languages out there today, with job opportunities for iOS developers booming. This project-based course will help you jump in on the action, even if you have absolutely no prior programming experience. Through demos and challenges, you’ll build a foundation to start building iPhone apps from the ground up and get paid to do it.