Members of the Unicode Technical Committee members will meet at Apple’s headquarters in Cupertino, Calif., next week to discuss the all-important addition of emoji or modifiers that would allow the use of redheaded emoji characters in a future update of the standard. 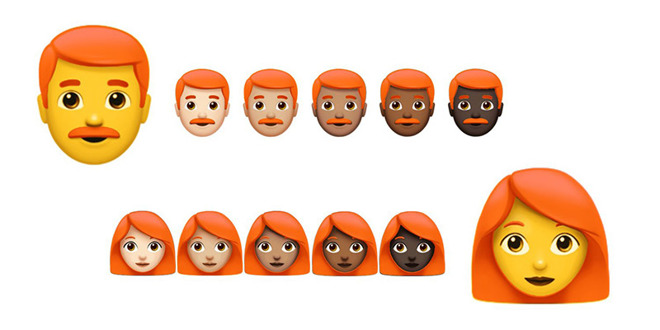 Announced on Thursday by the Unicode Consortium, the upcoming committee meeting will decide how best to implement emoji characters with red hair, a highly requested representation that is gaining support among users, according to Emojipedia. In fact, the dearth of redhead emoji has been the most frequent complaint to the publication over the past three months.

An Emoji Subcommittee proposal (PDF link) regarding potential solutions has been drafted and will serve as a jumping off point at the conference next week.

The addition of the redhead emoji is not a sure thing. Redheads make up 1 to 2% of the population, which could make it difficult to justify an entirely new emoji or modification of an existing one. Next week’s meeting will help decide whether the project will move forward.

Any new or modified emoji to honor redheads are not likely to appear until 2018, as the next version of Unicode, version 10 is only months away from a release.

While MacTrast has no vote in the decision for a redhead emoji, we’d like to declare we have long been fans of the hair color, likely since we first saw Poison Ivy in a Batman comic at an impressionable young age.