Verizon iPhone customers who have installed the new iOS 10.3 beta are reporting the option for allowing calls on other iCloud-connected devices is now available. 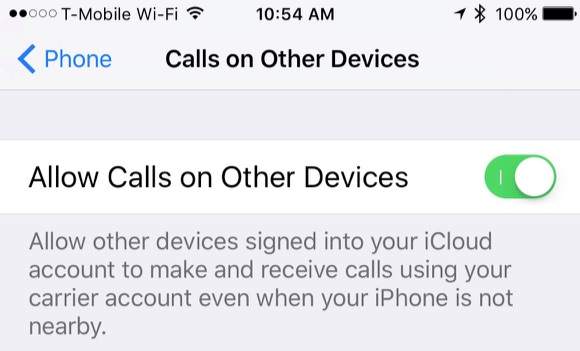 The setting is activated by opening the Settings app and going to “Phone” -> “Calls on Other Devices,” as seen in the screenshot above. (We’re on T-Mobile, but the steps are the same for any carrier.)

MacRumors reports a number of their readers have noticed the new feature on their devices. The feature allows iPhone users to make and receive calls via their Wi-Fi connection on other iCloud-connected Apple devices, including iPads, iPod touch devices, Apple Watch, and most Macs manufactured in 2012 or later. The feature requires all of the devices to be signed into the same Apple ID.

Verizon Was the Last Holdout

The MacRumors report notes the feature may not be live yet for all Verizon customers running the iOS 10.3 beta, so your mileage may vary. However, it should be available for everyone by the time the final version of the new operating system is ready for prime time.