Just in time for Mardi Gras, Apple Maps has added transit directions for the New Orleans, LA metro area. The new data will aid inebriated celebrants and others in using the area’s public transit, including buses, streetcars, and trains. 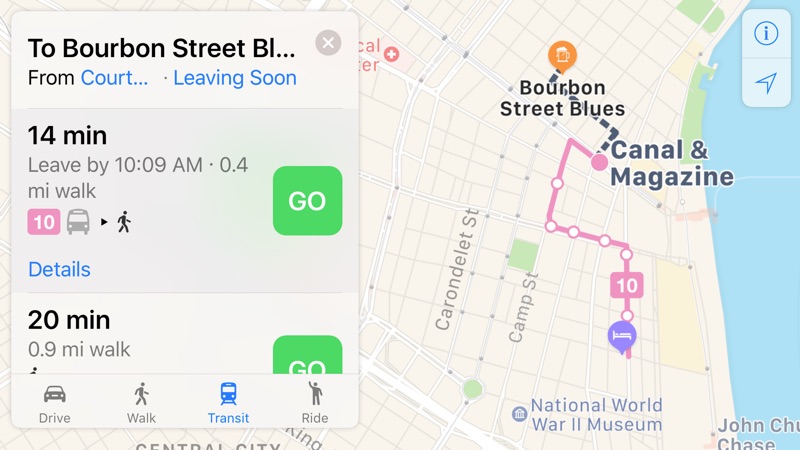 Apple introduced Transit in Maps as part of iOS 9 in select cities around the world, including Baltimore, Berlin, Boston, Chicago, London, Los Angeles, Mexico City, New York, Philadelphia, San Francisco, Sydney, Toronto, and over 300 cities in China. The feature has its own tab in Apple Maps on iOS 10 for entering directions.

Transit Directions are available for the following cities:

Bringing you public transit information for subways, buses, trains, and ferries with lines and stations right on the map, the Transit feature is customized for each city where it’s available. So signs on your screen will look the same as the ones on the street, and you’ll know exactly where the nearest subway station entrance is. When you plan a route, just one tap pulls up schedules, and you’ll get step-by-step directions to keep you on track. Or ask Siri to guide you. You can even favorite a specific transit line to get up-to-date information and reminders about its routes and schedules. The list of places supported with Transit is growing and now includes Japan.

The annual Mardi Gras celebration takes place on February 28. Parades and other festivities in New Orleans will make the transit directions in Apple Maps invaluable to festival goers.