The Epix entertainment channel on Wednesday launched their app for the fourth-generation Apple TV. The app offers channel subscribers access to the network’s collection of film and television content. 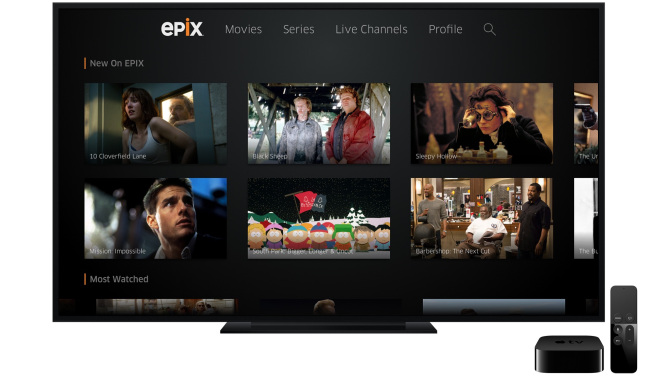 Starting Wednesday, Epix will be available on fourth-generation Apple TV set-tops to all subscribers of the premium movie service. New subscribers who sign up on Apple TV can gain access to a four-week free trial of the service; after the free trial expires, users must sign up for Epix through a pay-TV partner.

While Epix has taken their own sweet time to launch an app on the Apple TV, network CEO Mark Greenberg says the company is now “proud” to make its content available via Apple’s set-top streamer.

“Apple has been a renowned leader in shaping the digital landscape and I’m proud to make our content available on Apple TV,” Mark Greenberg, Epix’s president and CEO, said in a prepared statement.

Content for the app includes around 2,000 movies and original television shows such as films from the Hunger Games, James Bond and Star Trek franchises, and original content including series “Berlin Station” and “Graves.” The channel also offers documentaries, and music and comedy events.

The channel was created as a joint venture between Viacom, Lionsgate, and MGM. Following Lionsgate’s acquisition of Starz, it is in talks to sell its 31% piece of Epix to MGM and Viacom.

The new app will allow Epix subscribers to watch live TV, create viewing lists, browse movie trailers, and more. For more information about subscribing to the channel via your local cable or satellite provider, visit the Epix website.

The Epix app is free and is available for iOS and Apple TV devices in the App Store. [GET IT HERE] The network also makes its content available via cable and satellite providers, as well as Amazon Fire Tablets, Android phones and tablets, Google’s Chromecast, Sony’s PlayStation 4, Roku players and TVs, Android TVs, TiVos and Microsoft Xbox One.