Matthew Roberts has shared his latest “Apple Park” campus 4K drone video with us, and it shows a basically completed research and development center, Solar Panel installation progress, and more. 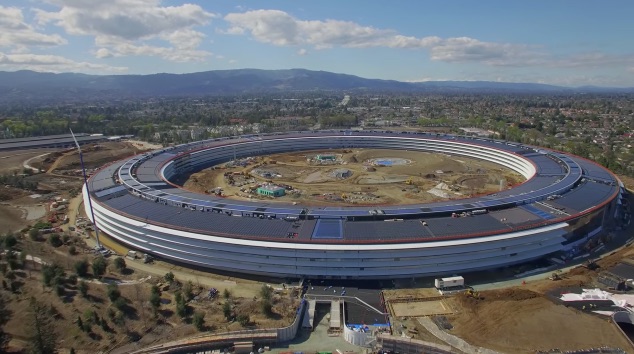 Landscaping on the site is still progressing nicely, with more trees appearing over the underground tunnel, and workers preparing to finish the meadows areas surrounding the campus.

Walkways are winding their way through Apple Park, quickly adding up to the estimated 2 miles of walkway that will carry foot traffic through the campus. Roberts’ video also shows “major changes” to the employee fitness center, and the large courtyard located on the inside of the circular main building is coming along nicely.

Apple has announced the new campus will be named “Apple Park,” and the project’s new auditorium/theater will be named “Steve Jobs Theater.” Employees will begin moving their boxes of belongings into the campus in April.

Construction on the campus, including surrounding buildings and parklands, is expected to continue through the summer. Envisioned by late Apple co-founder Steve Jobs as a center for creativity and collaboration, Apple Park has transformed miles of asphalt sprawl into a haven of green space in the heart of the Santa Clara Valley.