Apple’s Swift continues to rise in the ranks of the most popular programming languages. The language is ranked 10th in the latest TIOBE Index, up four places from this time last year. 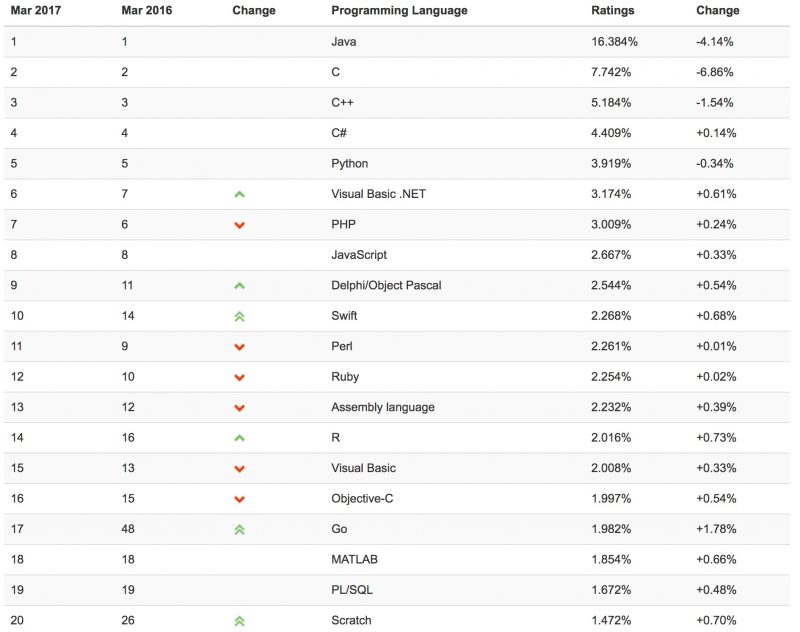 In the latest TIOBE Index, which ranks the popularity of programming languages, Apple shot up from the 14th spot last year — and has already cracked the top 10. That may not sound too exciting, but considering all the other languages in the top 10 are at least two decades old, Swift is catching fire in a major way.

Apple promotes the language as ideal for children who are interested in learning to code apps. The company released its Swift Playgrounds app for the iPad, alongside iOS 10. The app guides kids into coding with a number of puzzles they must solve, using the Swift language.

Swift Playgrounds is a revolutionary new app for iPad that makes learning Swift interactive and fun. Solve puzzles to master the basics using Swift — a powerful programming language created by Apple and used by the pros to build many of today’s most popular apps. Then take on a series of challenges and step up to more advanced creations. Swift Playgrounds requires no coding knowledge, so it’s perfect for students just starting out. It also provides a unique way for seasoned developers to quickly bring ideas to life. And because it’s built to take full advantage of iPad, it’s a first-of-its-kind learning experience.

The app debuted onstage during Apple’s Keynote Address at WWDC 2016, and was described as an “innovative new app for iPad that makes learning to code fun and easy for anyone.”

The app also includes a number of built-in templates to allow students to modify and build code to add their own graphics and touch interactions.