Apple is now accepting donations via iTunes for the Red Cross relief efforts for those affected by Hurricane Harvey. The Cupertino firm has added banners to it United States website and iTunes Store supporting the efforts. 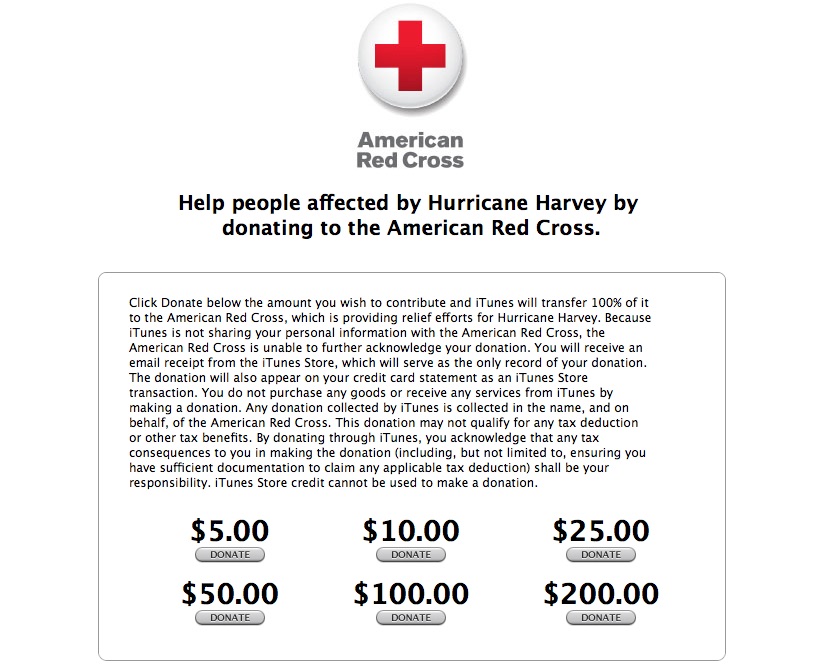 iTunes users can choose to donate $5, $10, $25, $50, $100, or $200. 100% of the proceeds will go to the American Red Cross to support them in their efforts to provide assistance to folks hit by Hurricane Harvey, which has devastated Southeast Texas. All donations are processed through your Apple ID-connected payment method.

Prayers for Texas and all those affected by #HurricaneHarvey. Join us in the relief effort by donating: https://t.co/QLBMFOjaDG

Apple CEO Tim Cook tweeted about the donations early Sunday morning. Rescue workers are continue to help residents trapped by catastrophic flooding caused by Harvey, which made landfall late Friday night as a Category 4 hurricane. The storm has since been downgraded to a tropical storm, but is expected to remain in the region over the next few days.

Apple has previously collected donations for Red Cross relief efforts for numerous disasters in the past, including Hurricane Matthew, the 2015 Nepal earthquake, the 2016 Louisiana floods, and more.