Apple says iOS 11 is now installed on 52 percent of iOS devices. Apple shared those stats on Tuesday on its App Store support page for developers. It’s the first time Apple has shared official statistics about the new operating system since its release. 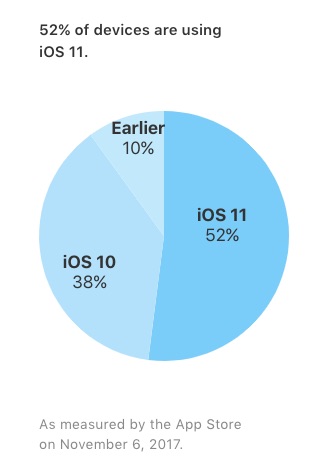 Previously, the only installation stats were from analytics firm Mixpanel, which indicates installation for Apple’s latest and greatest mobile operating system is at around 66 percent, as of Monday. Apple’s stats come from their App Store, while Mixpanel tracks user interactions with web and mobile applications.

The update included bug and security fixes, new emoji (which, to be honest was likely the real draw for updaters), and also brought back the 3D Touch App Switcher which allows users to access the App Switcher by performing a Force Touch on the left edge of the iPhone’s display.

iOS 11.2 is also likely to lead to additional installations, as it will bring the promised Apple Pay Cash feature, which will allow person-to-person payments via iMessage.