A handwritten advertisement from Apple co-founder Steve Jobs for the Apple-1 computer will be auctioned by Bonhams.

In the handwritten ad, Jobs highlights that the Apple-1 comes with 8K bytes(!) of RAM, full CRT terminal, 58 ICs “which includes 16 for 8K RAM!!” And if you are mistaken, the ad is only for the circuit board of the machine and a manual which costs $75 and as per Steve Jobs, that’s “a real deal.”

Jobs wrote the ad back in 1976. Back then, Apple had released its first computer, the Apple-1. The new computers were assembled by Apple co-founders Steve Jobs and Steve Wozniak, and sold for $666.66.

STEVE JOBS PROMOTES THE APPLE-1.”
With the first 50 boards sold to the Byte Shop, Steve Jobs continued the momentum by marketing bare Apple-1 printed circuit boards (PCBs) to friends and acquaintances. The present manuscript is essentially a specification sheet for the computer and was given to the consignor during a visit to Jobs’ garage. Jobs refers to the computer as “Apple Computer-1” and states that it uses either the 6800, 6501 or 6502 microprocessor, but that the 6501 or 6502 was “recommended because we have basic.” He touts the “full crt terminal” the “58 ic’s which includes 16 for 8K ram!!” Curiously, Jobs states “basic on the way (ROM),” which never materialized for the Apple-1, but did the following year for the Apple II. Jobs quotes the price of $75 for the board and manual, “a real deal” and lists his mailing address and phone number at the bottom. 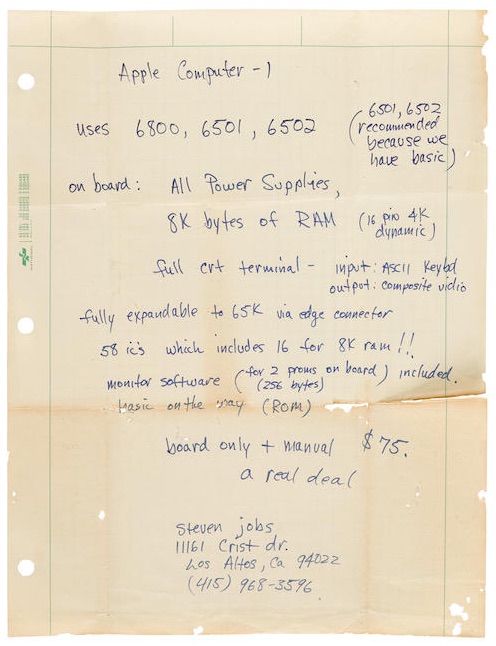 The ad is expected to bring $40,000 to $60,000 US from the auction, which will take place Wednesday, December 5. Bonhams will also be auctioning off a working Apple-1 computer, which had been gifted to the current owner by Steve Jobs. Only eight Apple-1 units are still known to be in a working state.

The manuscript is accompanied by two Polaroid photographs. The first shows an Apple-1 on a wooden table with a keyboard, monitor and power supply partially visible in the right edge. It looks very much like the “Production Prototype,” number 2 in Mike Willegal’s Apple-1 Registry, with its orange capacitors, white ceramic MOS MCS 6502 and with a similar power supply setup. The other Polaroid shows the Apple-1 screen with “Apple Computer Co. at the bottom and Jobs’ address and phone number for contact. Jobs has written on the lower margin “40×24 OR 26 lines / fuzzy because camera wiggled.”

For more information about the auction, visit the Bonhams website.