For the last several years, a company out of Switzerland, has been crafting fine wooden stands for your electronics. I recently was able to try out a few and they even work great with the new MacBook Air and iPad Pros. Today is the last day to order them directly so that they arrive for Christmas.

I first tried out the Yohann P2 in walnut for the iPad Pro 11″ for $139. During my testing, I evaluated several iPads with the P2. They were the iPad Pro 11″ and iPad 6th Gen 9.7″. Each fit nicely in the padded slot where the iPad edge goes. It can be orientated in either portrait or landscape.

If you have a large case on your iPad, this is not the stand for you. It is meant to showcase the iPad’s design, engineering and materials. Together, the Yohann P2 and iPad Pro compliment each other and they make a statement on your desk. 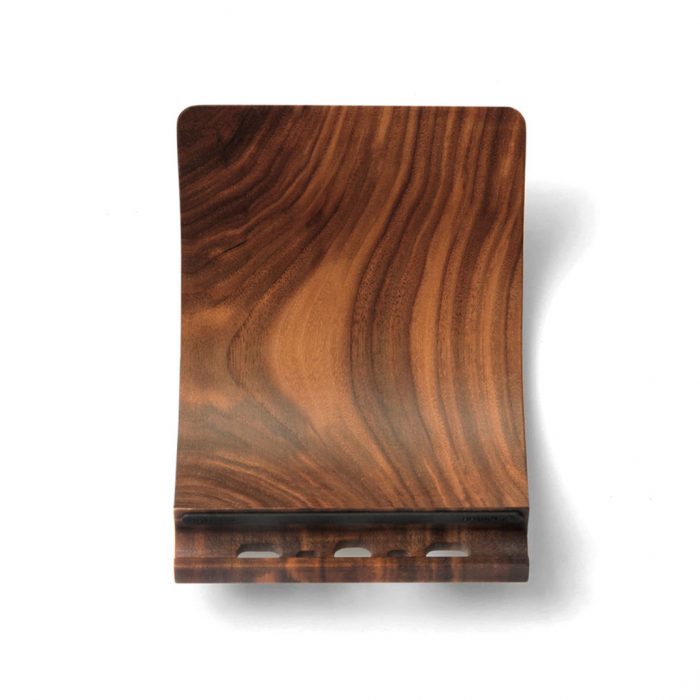 I used my iPad Pro with the P2 most often in landscape to watch streaming shows. I would then switch to my 6th Gen iPad with the P2 in portrait to use the Logitech Crayon. Drawing with the digital Crayon and its most laid back orientation, allowed me to edit photos with a nice elevation off of the desk’s surface. 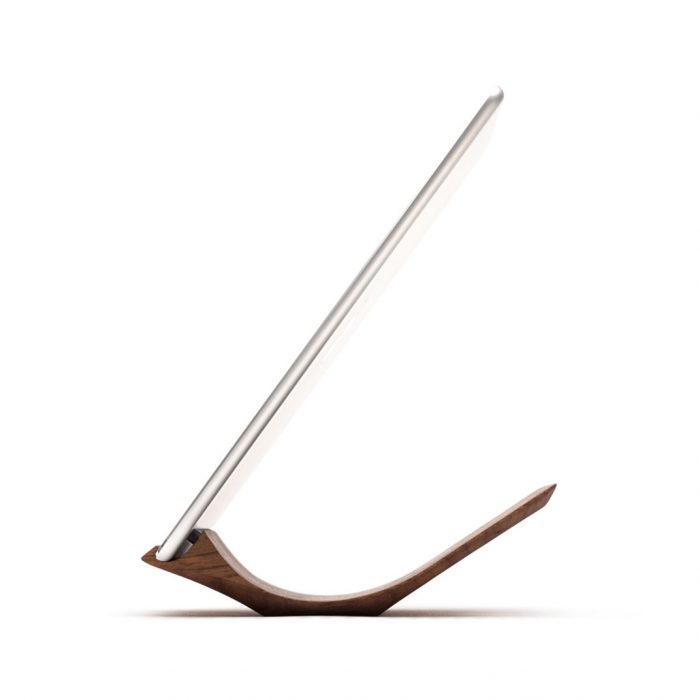 While walnut is a strong wood, the stand is on the thinner side and might tip over if you draw with a heavy hand. The P2 stand works best for those that will use it on flat surfaces. If you do a fair amount of presentations with an iPad, get this stand. It projects that you pay attention to details. Yohann makes a regular iPad and iPad Pro stand with an Apple Pencil holder.

Yohann goes a step further and makes a MacBook Pro stand, the B1 for $159. I tried their MBP stand in oak, which is a warmer tone of wood. Like with the P2, this stand is made to work with an Apple device, a MacBook, that does not have a case on it. 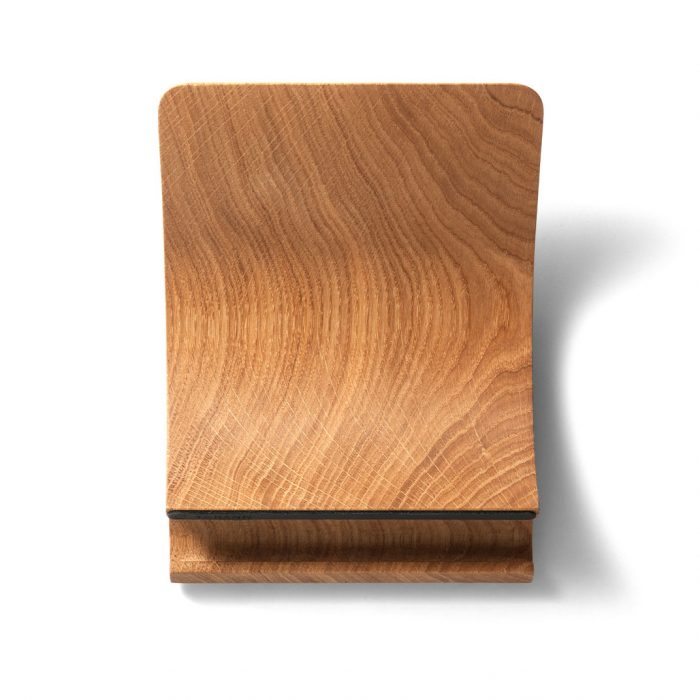 My birch wood desk in the office is a brighter tone and looks better with the oak B1 stand. This stand has a single orientation and is made significantly stronger. I checked shortly after the new MacBook Air with Retina screen was released and this stand works well with it too.

Setting up my MBP with a larger Apple wireless keyboard, Magic Trackpad 2, Magic Mouse, and wireless Wacom tablet look so much better with the Yohann B1 stand. The MBP screen was closer to eye level, helping my ergonomics and reducing neck strain from constantly having to look down.

The space behind the stand allowed me to store a few memory sticks out of sight. Due to the length of my MBP charging cable, I had to slightly adjust where I setup the B1. 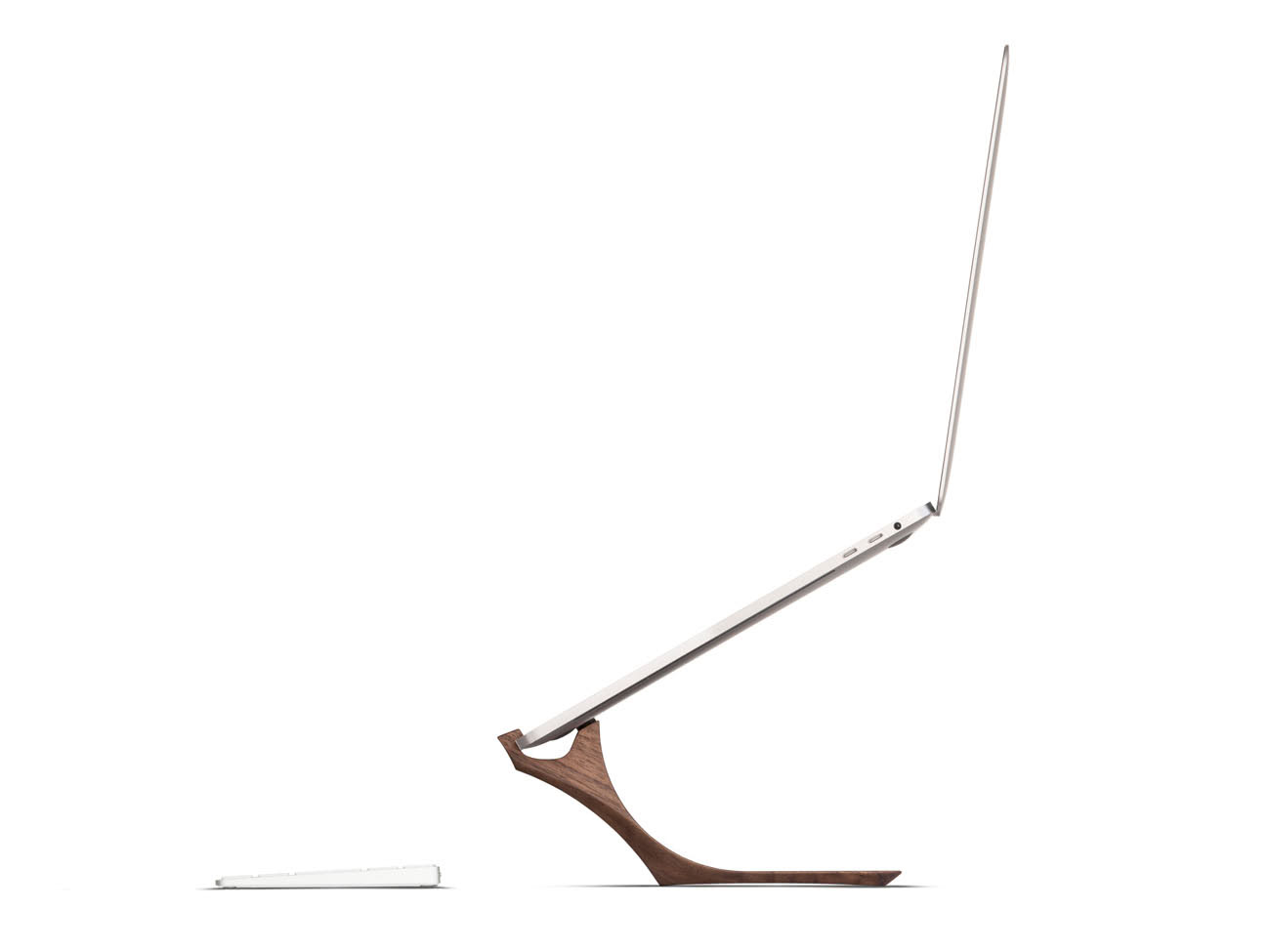 If you use your MacBook Pro with a lot of accessories, get a hub that attaches with a cable rather than one that directly connects to the computer. This will prevent the weight from dongles and other devices from tipping the MBP over.

Yohann spends a considerable amount of time designing and hand crafting their P2, B1 and other stands out of fine wood. Each stand looks like they came out of a modern design section from a museum.

I have tried a number of stands for computers and iPads over the years, and the one I received from Yohann are my favorite so far. I know how hard it is to craft something like these stands, as I used to make tables and jewelry boxes out of wood. Their stands elegantly compliment your premium Apple devices. They make stands for the iPad mini along with the Apple Watch too.

Disclosure: I received the P2 and B1 stands from Yohann at no charge for review. I have not been compensated for this review. All thoughts and opinions are my own.