“With slowing iPhone sales, the installed base of iPhones in use in the US grew only slightly in the quarter,” said Josh Lowitz, CIRP Partner and Co-Founder. “As Apple itself indicated, iPhone revenues declined relative to last year, driven primarily by reduced demand in overseas markets. US sales remain relatively stable, which shows up in slight growth in the US installed base. With longer replacement cycles and high loyalty rates for consumers upgrading from iPhones as well as Android phones, the modest growth in the installed base of iPhones in the US is primarily driven by first-time smartphone buyers and the limited number of platform switchers from Android to iOS.” 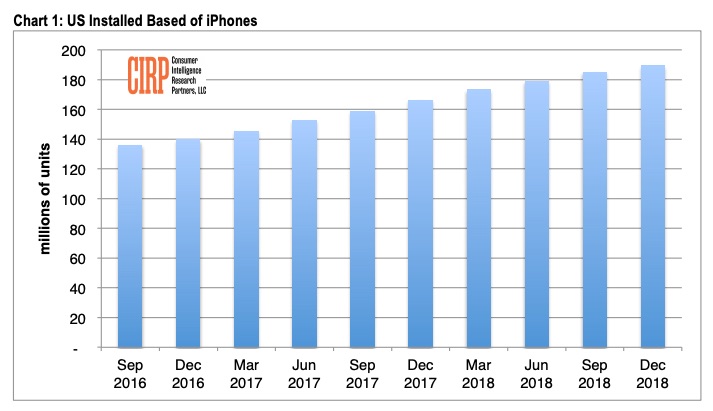 CIRP based its estimate of the U.S. iPhone installed base on an estimated global sales of 62 million iPhones. That figure was derived from an estimated Average Selling Price (ASP) of $839 and Apple’s disclosed iPhone revenues.

“As Apple noted, to the frustration of investors and other observers, it no longer discloses iPhone unit sales,” said Mike Levin, Partner and Co-Founder of CIRP. “Consequently, we use our weighted average retail price for the US, called US-WARP, as a close approximation of ASP. Based on an estimated ASP of $839, and Apple’s disclosed iPhone revenues of about $52 billion, we estimate Apple sold approximately 62 million iPhones, of all models and storage capacities, globally in the quarter. We then translate this estimate of global unit sales into our estimate of US unit sales and its implications for the US installed base.”