A new report shows the Apple Watch accounted for nearly half of the 12.3 million smartwatches shipped during the second calendar quarter of 2019.

A new report shared on Tuesday by Strategy Analytics says Apple shipped an estimated 5.7 million smart watches worldwide during the quarter. Those numbers earned Apple’s wearable over 46% market share, continuing to be the number one smartwatch in the industry.

Apple shipped 5.7 million smartwatches worldwide in Q2 2019, rising an above-average 50 percent from 3.8 million in Q2 2018. Apple Watch remains a long way ahead of the chasing pack and its global smartwatch marketshare has grown to 46 percent this quarter, up from 44 percent a year ago. Apple Watch has fended off strong competition from hungry rivals like Fitbit. Apple remains the clear smartwatch market leader. 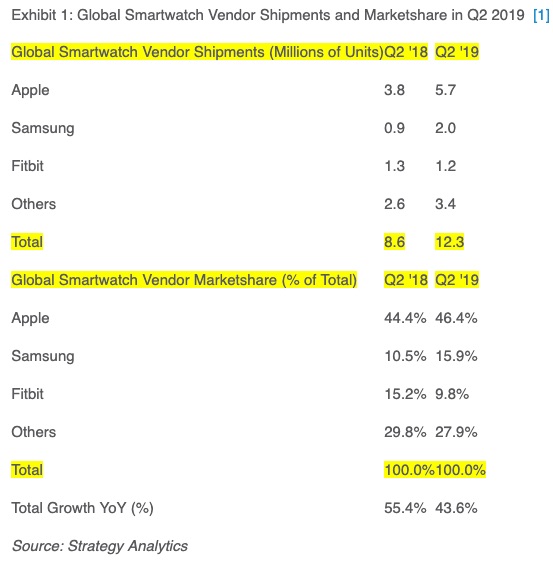 It should be noted that Apple does not break out Apple Watch sales numbers, instead including it in a Wearables, Home, and Accessories category, which means Strategy Analytics’ numbers are estimates.