A new Flurry Analytics report shows that nine of the top 10 smartphones that were activated on Christmas Day were iPhones. LG’s budget K30 the only other manufacturer’s device to make the list.

The entire iPhone lineup made an appearance in the top 10 Christmas Day smartphone activations list, ranging from the iPhone SE to the top-of-the-line iPhone 12 Pro max.

The iPhone 11 was the top activated device on Christmas Day for the second straight year, followed by the iPhone XR. The leading premium smartphone in the list was the iPhone 12 Pro Max, which Flurry Analytics says has continued to see “strong and long-lasting demand.”

Overall, budget devices dominated the top ten, with the iPhone SE and LG K30 seeing 34 percent and 181 percent surges respectively. The popularity of budget-priced devices on the list leads Flurry to believe that the success of those and other past years’ models, such as the ‌iPhone 11‌ and ‌iPhone XR‌, indicate that American consumers were more price-sensitive this holiday season.

Oddly enough, the iPhone 12 mini, which is the lowest-priced iPhone 12 failed to make the list, perhaps since it is only $100 cheaper than the larger iPhone 12.

2020 Christmas Day smartphone activations were down 23% from 2019. Flurry speculates that this may be due to COVID-19-related financial hardships, more limited family gatherings, or more gift-giving being spread out more this year. 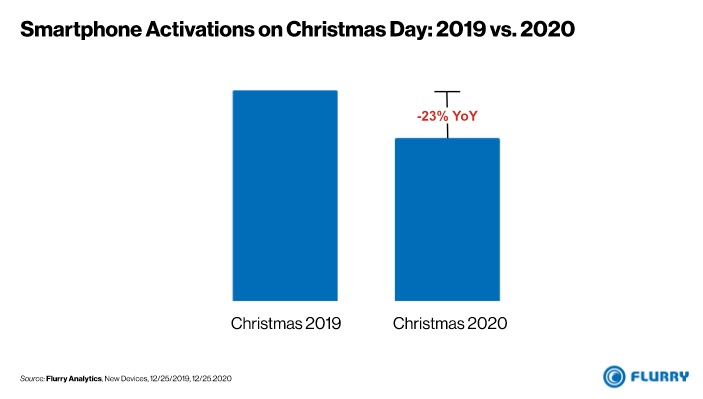