Apple’s M1-powered iMac became available on Friday, and iFixit has gotten its hands on one and has done that teardown voodoo that they do so well.

The teardown, which is being conducted at the time of this article, involves a mid-tier purple ‌iMac‌ model with an 8-core CPU, an 8-core GPU, and 8GB RAM.

iFixit did their usual detailed x-ray before opening up the machine, showing two main metal plates inside the machine, as well as an RF passthrough for the antenna hardware in the Apple logo. Almost all of the silicon is concentrated into narrow horizontal strips at the top (the display board) and bottom (main logic board).

iFixit reports that when they did begin their teardown, they found that it was sealed with “classic ‌iMac‌ adhesive,” which is not as hard to work with as products like the company’s iPad.

The front of the iMac is a single piece of glass, some there is no separate front to the chin that blocks access to the computer’s internal like previous models did. The chin houses the iMac’s logic board, with two fans blowing into the device. Heat is drawn away from the M1 by a copper heatpipe and two short heatsinks. 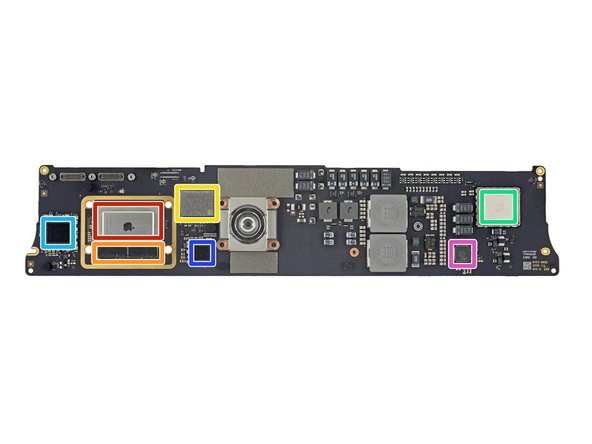 Components on the logic board include:

iFixit also plans to share details on the new iMac’s Magic Keyboard Touch ID sensor, as well as information on the speakers. It will provide the usual repairability score once the teardown is complete.