A new report says that the Apple Watch has achieved its highest half-year “attach rate,” or the percentage of iPhone users who also have an active Apple Watch. Apple Watch exceeded 100 million active users in Q2 2021, dominating the entire smartwatch industry.

A Counterpoint Research report says that its half-year result for H1 2022 in North America is its highest attach rate ever. (That’s the proportion of iPhone users who have an Apple Watch attached.)

“While Apple gains a trickle of customers from the Android ecosystem every year, its key smartphone markets have reached or are near saturation,” says Counterpoint Research. “This places Apple Watch at the center of Apple’s hardware strategy as the company looks for top-line revenue growth.” 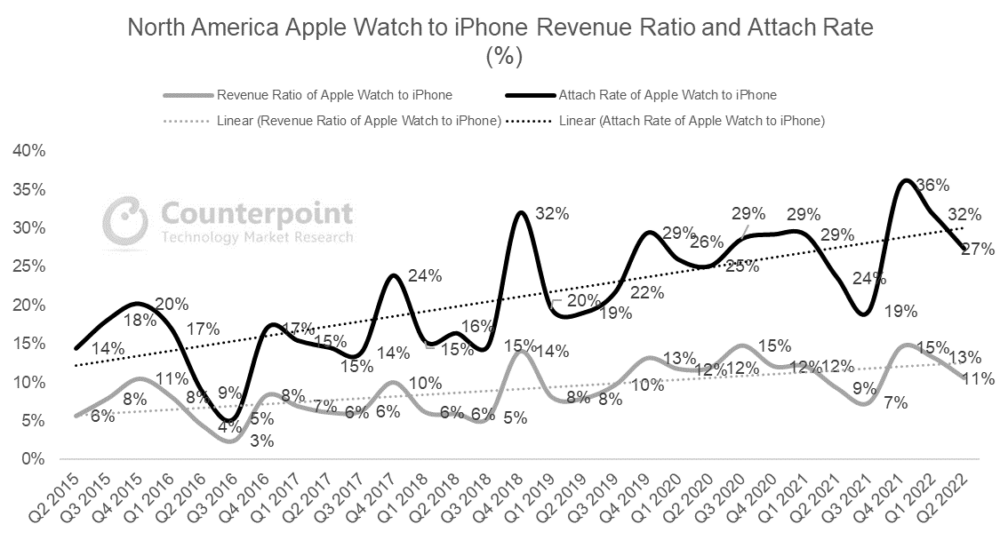 In Q4, 2020, Counterpoint says the attach rate reached as high as 40%for the quarter. Apple’s closest competitor, Samsung, managed a 14% attach rate in Q3 2021, but the current quarter is showing a 9% attach rate.

As you might expect, the attach rate fluctuates through the year, as new iPhones are released, buyers may not immediately opt to buy an Apple Watch as well.