You might remember last year’s huge iPhone 4 media blitz when a prototype iPhone 4 was picked up and later purchased by Gizmodo after reportedly being left on a bar stool by Gray Powell. You’d have thought that Apple would have learned their lesson, but if this new report is true, an iPhone 5 may have just been spotted on San Francisco’s public transit system, in the hands of a suspected Apple employee. 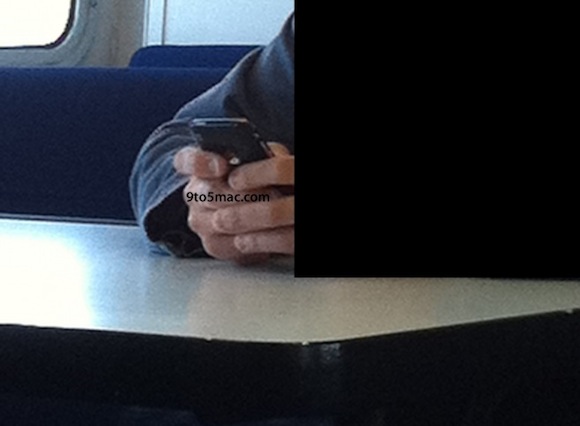 The report comes to us from 9to5Mac, who claims to have received images taken by a tipster who saw the device, and the device certainly appears to be different from any other hand-held Apple device currently on the market.

9to5Mac believes that the tipster did, in fact, spy a brand new Apple device of some kind, which they think is probably the iPhone 5. Judging from the photograph, the device appears to be both thinner and wider than the current iPhone 4, features rounded metal edges, and has a glossy and tapered back likely made of either glass or plastic.

While the tipster didn’t see the front button, and the man kept the Apple logo covered most of the time, the logo nevertheless became evident long enough for the tipster to snap a photo. The report suggests that the man was obviously going to extended measures to hide the device’s details.

It’s unclear whether or not this is a legitimate Apple product, and even if it is, it’s not certain that it is the iPhone 5, but it’s not terribly far-fetched to suggest that the device pictured in these images is, in fact, an iPhone 5 prototype of some kind.