According to several sources, the iPhone 4s/5(?) will be announced on Tuesday, October 4th.  What is the iPhone 5 release date? -when can you expect to get one in your hands is the most important question.  To project an answer, lets take a walk down memory lane.  Remember with me the year 2007.  We were young technologists and eager to get rid of those pesky Motorola Razors with their tactile buttons and limited web capabilities.  But, we had a bright future ahead of us… 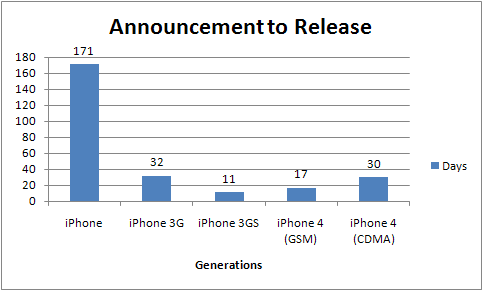 October 4, 2011(?), may very well be the announcing date for the iPhone 4s/5, but when will we really get to use one?  Go ahead and throw out the wild card number of 171 days, which we saw in round one.  Based on Apple’s ability to predict the worldwide demand for the next upgrade, I would hypothesis we may be lucky enough to fall in the two week range, similar to the iPhone 3GS and iPhone 4 time frames.  We are certainly looking at a Thursday release, which will give customers the ability to purchase phones throughout the weekend, effectively extending the weekend one extra day.  Based on the trend in previous information, I predict the iPhone 5 release date is Thursday, October 20, 2011.  Happy hunting.

When do you think the iPhone 4s/5 will release? Post your comments below.