Victoria, Australia police have issued a warning to motorists, warning them not to rely on Apple’s iOS 6 Maps app, after several travelers become stranded in Murray-Sunset National Park while trying to reach the city of Mildura using the app’s directions. 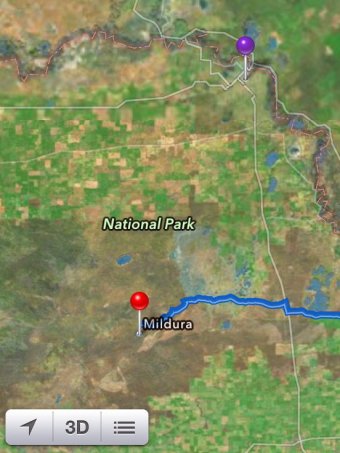 Local Police have been called to assist distressed motorists who have become stranded within the Murray-Sunset National Park after following directions on their Apple i-phone.

Police concern is running high, as there is no water supply inside the park, and temperatures can reach as high as 46 degrees Celcius, (114.8 degrees Fahrenheit.)

Reports say that some motorists have been stranded for up to 24 hours with no food or water, and have walked long distances through perilous terrain in order to get phone reception.

The Maps app shows the city of Mildura in the middle of the Murray-Sunset National Park, which is actually 70km or 43 miles from the city’s actual location. In the photo shown above, the red pin is where Apple has Mildura located, while the purple pin is the actual location of Mildura.

Victoria police have contacted Apple about the inaccuracies, and are warning travelers to use an alternative mapping system until it is fixed.

After the launch of the Maps app in iOS 6, Apple received much criticism over inaccuracies in mapping data. Apple CEO Tim Cook issued a personal apology to the public over the issues, and in his recent interview with NBC newsman Brian Williams, once again admitted that Apple “screwed up”, and is “putting the weight of the company behind correcting it.”

Update: The Guardian reports that Apple has quietly updated their Maps app to fix the potentially life-threatening issue.