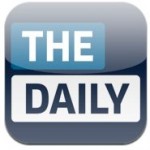 Things don’t seem to be going too well for Rupert Murdoch’s The Daily. It was revealed on an earnings call that the subscription based iPad only app turned in a $10 million loss in the last quarter.

While it was of little surprise that MySpace made losses of $165 million, it was a bit disappointing to learn that The Daily is not making much of an inroad, both subscription and revenue wise.

The Daily cost in the region of $30 million to launch and has an estimated weekly operational cost of $500,000. While the app is free to download, a weekly subscription will cost you ¢99 and a year’s subscription $39.99.

Asked to comment on The Daily’s performance, Carey says it’s a work in progress, which lost $10 million last quarter. Then, in the background, someone–most likely CFO Dave DeVoe–mentions “800,000 downloads.”

Assuming that’s the actual number, that’s the first time anyone from News Corp. has talked about the iPad app’s performance. I’ve asked News Corp. to confirm.

Either way, $10 million in losses is quite poor. I suppose it doesn’t help when Apple take a 30% cut of all in-app subscriptions.

We covered the launch of The Daily here. The Daily is available in the US only but an international launch is expected in 2011.