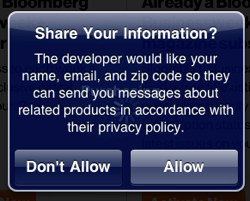 Apple is signing on big newspaper and magazine publishers after months of unnecessary wrangling over the issue of customer data mining.

It turns out that the publishers’ fear that Apple’s policies would deny them the consumer data they need to do business was unfounded. As often as not, to get the customer’s email’s name and email address, all you have to do is ask.

Well, all that worry was for naught. Surprisingly, half of iPad subscribers are clicking “allow” in order to share their information.

The publishers balked at Apple’s in-app subscriptions for iPad magazines since they had no plans to relinquish valuable subscriber data. The industry has used this demographic data as the cornerstone of their business model for decades and the switch to digital, publishers feared, would be a death knell if they no longer had access to subscriber names and addresses. This information is used for targeting advertising and lucrative third-party offerings.

Traditional publishers still have much to worry about since Apple doesn’t seem to be budging on their demands for a perpetual, gangster-style 30% cut of in-app purchases and subscriptions. In fact, this could be why Time, Inc. is not offering an iPad subscription option and is instead giving free access to print subscribers. It’s ludicrous for Apple and Time to have such a stand-off, and even more ridiculous to reward the behavior of subscribing to a dead tree edition.

Not to worry though. Google has just stirred things up by announcing a mere 5% cut of developers’ revenue. It will be interesting to see if Apple flinches.