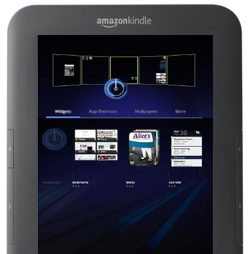 According to sources from Chinese component suppliers, Amazon has just placed a massive order with contract manufacturer Quanta to make a sort of premium Kindle tablet.

The device’s monthly orders during the peak season are expected to reach about 700,000-800,000 units and Quanta is expected to start shipping as soon as the second half of 2011 with the orders to contribute more than NT$100 billion (US$3.5 billion) to Quanta’s annual revenues in 2011, the sources noted. In response to the report, Quanta declined to comment on its clients.

If this report is to be believed, it seems Amazon has finally made its move and will make a big push this holiday season as they take on Barnes & Noble’s NOOK Color, the bargain Android device, and others to chip away at the iPad 2 (um, tablet) market. It would presumably be powered by Android OS, since they already have their own Android app marketplace and Cloud Player for Android devices.

Amazon has all of the pieces in place and is poised to move into this market. They have a massive Kindle fan base, the Cloud Player, and an excellent retail distribution system. Along with the new ad-subsidized Kindle, this would complete their lineup of budget to premium e-book readers and tablets.