Along with yesterday’s big topic – Apple’s 10th retail anniversary – CultofMac reports that Apple Store employees are considering unionizing. I imaging that if Apple Retail Store employees ever went on strike, the response would be very interesting to watch unfold… 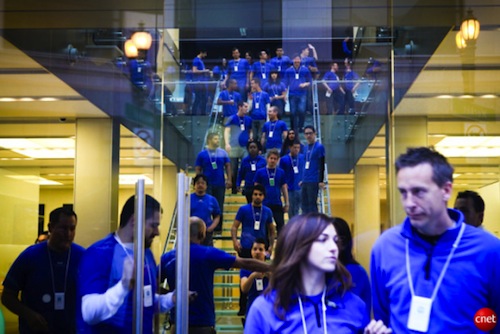 In fact, this was really just a very small but vocal group of Apple Store Employees who, rather than celebrating, decided to use the event as a political pulpit, and are working hard even now to unionize in response to what they call unfair treatment and compensation.

The group, called the Apple Retail Union, made an announcement which included this statement:

We are launching today to get fellow employees, shoppers, and the world know that we work in one of the most demanding retail environments while suffering through unfair treatment and compensation among many other various issues… We deserve better. Our time has come.

Whether or not the time for an Apple Retail union really has come or not, we imaging that certain notable people will have something to say about this, as it does seem that there growing talk of such a union. MacWorld reports that they have heard growing reports amongst Apple employees in the Pacific Northwest about this, including mention that an attempt at negotiating with management at the Alderwood Store have have occurred recently.

It’ll be interesting to see the reaction. With their jobs in unusually high demand for retail jobs, it’s likely that Apple could, without taking on serious damages, fire the lot of them and have them replaced in no time flat. Only time will tell how this might unfold.