US Senator Al Franken has just announced the witness list for next week’s hearing “Protecting Mobile Privacy: Your Smartphones, Tablets, Cell Phones and Your Privacy” before the Senate Judiciary Subcommittee on Privacy. I have maintained that this location thing with Apple is a non-issue, but Senator Franken wants some answers from Apple and Google.

Apple’s Vice President of Software Technology, Bud Tribble will be in attendance at the hearing May 10th to defend his company’s location tracking and privacy practices. Meanwhile, the Director of Public Policy at Google, Alan Davidson, will also be on hand to answer for Android’s location tracking practices.

Apple recently released iOS 4.3.3 to address “changes to the iOS crowd-sourced location database cache.” The update reduces the size of the cache, no longer backs it up to iTunes, and deletes it entirely when Location Services is turned off. 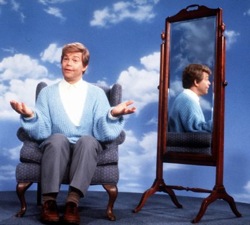 Will Stuart Smalley, er, Sen. Franken sit Bud Tribble in front of a mirror and make him repeat: “I’m good enough, I’m smart enough, and dog-gone it, people like me?” Let’s hope so, that would make for excellent use of taxpayer resources.